He wanted to show his face yesterday, but yielded for teammate Lars Boom. In the third stage of the Tour de France, Lars Petter Nordhaug was in a position to attack and he did just that. Unfortunately for the Norwegian from the Belkin Pro Cycling Team, his lead group did not last to the finish in Calvi.

Cliché
Bauke Mollema has emerged unscathed from the opening triangle on Corsica and that was a big positive for the leader from Team Belkin after three days on the island. “I am satisfied with how it went, because you can only loose the Tour here, not win it. Today was a hectic day but at the important junctures, we were in a good position up front.”

Lars Boom
“Despite the fact that it was a hectic day today – stop and go all the way – it went reasonably well. I am still miffed that I was in that lead group yesterday which ultimately was all for naught and cost me a lot of energy. I would have like to have joined in the sprint today, but yesterday’s exertion kept me from doing that.”

Laurens ten Dam
“Everything went fine for me. So little happened that I actually have nothing to tell. There was less stress than anticipated and that was a good thing.”

Robert Gesink
“It was on and off all day and since I am not riding for the classification here, I could save my energy on the last climb. My role is different than before and that means that I can be more relaxed on the bike although in the Tour, there’s never lack of excitement.”

Tom Leezer
“There wasn’t a metre that was flat nor straight and that was very unusual but I got through the day in good shape. I hope the race will be less stressful on the mainland but I doubt that it will. It’s the Tour after all.”

Bauke Mollema
“I am satisfied with how it went, because you can only loose the Tour here, not win it. Today was a hectic day but at the important junctures, we were in a good position up front.”

Lars Petter Nordhaug
“After the missed opportunity yesterday, I wanted to attack today. I landed in a strong group together with Chavanel amongst others, but the headwind ultimately tempered our escape. Just as we were nearly reeled in, I made another go of it as you must fight on to the bitter end. You never know what will happen behind you.”

Bram Tankink
“Although today was not as difficult as we had expected, the peloton maintained a very manly tempo and that made it a bit tougher. Tomorrow, the team time trial is on the programme. That’s our focus for this evening and tomorrow. First we had to finish strong in Corsica.”

Sep Vanmarcke
“It was a little too warm for me today. If it is hotter than twenty degrees, I have to get used to it. Luckily, I could get done what I needed to do for the team.”

Maarten Wynants
“In the descent following the second mountain sprint, I supported Bauke. Afterwards, I set him off at the last climb. I am glad we have survived these three days on Corsica and have lost no time.” 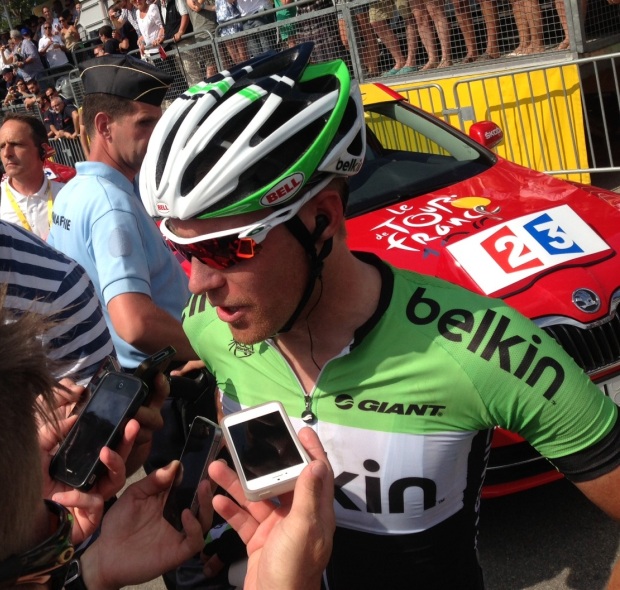