Belkin Tour Challenge for kids was an amazing adventure

After 13 flat tyres, 1 band aide, 2 fallen water bottles, 10 bee stings and even fishing wire in the bicycle chain, 570 kilometers of cycling through the gorgeous Dutch inlands, over the cobbles of Flanders in Belgium and climbing the hilly inlands of France, we have reached our goal. For nine young heroes, Paris was the final destination this weekend, after an amazing sportive adventure.

Not only did they arrive safely in Paris, they have also been able to raise awareness for the Jeugdsportfonds. A charity that offers children the possibility to exercise, when they grow up in a family that does not have the financial means for it. Together they have raised € 30.000,-, which allows 120 children to exercise for a year.

Road to Paris
Before the nine children, ages between 11 and 14, started this cycling journey, they only cycled to school or their sports club. However, after being selected for this in May, they have trained under professional supervision provided by Team Belkin and the Municipality of Utrecht for three Sundays. And after having cycled for 7 days, you might say they have become professionals. For an entire week, they have cycled and lived as a true professional cyclist. Every morning they got up early, made their beds, packed their stuff and got on their bicycles for that day’s stage. In between the stages they have also talked to the press. However, there was also enough time for fun, and they have, amongst other things, received a clinic on the tracks, swam in the pool, stayed at a camping and in hotels, spend some time in the sun and played a lot of water games.

Tour finish and transmission of Grand Départ Utrecht
On Sunday the 27th of July, the day of the finish of the Tour de France, the young riders were invited at the Dutch Residency, by the ambassador in France, Ed Kronenburg. The riders were received as heroes and were praised for their dedication. They have done an amazing performance and have, in a way, cycled the first kilometers of the next Tour de France. “It’s great that the first sportive link between Utrecht and Paris has been made by children,” Ed Kronenburg.

All the riders received a medal, and were invited to join the finish of the final stage of the Tour de France in Paris as VIPs. They were also present at the official transmission of the tour start to the Municipality of Utrecht. The Grand Départ will take place there next year, with a Time Trial on Saturday the 4th of July 2015, and the start of the second stage on Sunday the 5th of July. 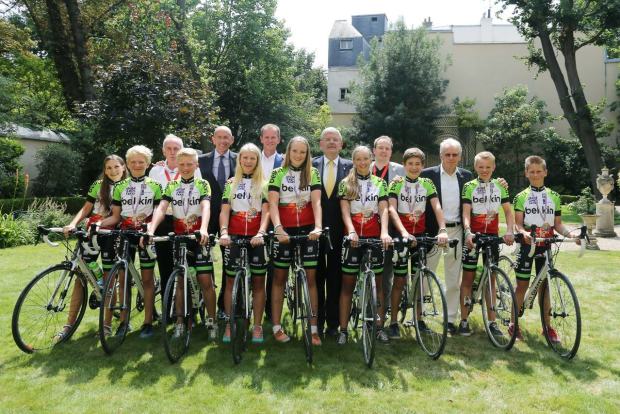