Christopher Blevins finished 12th for the Axeon Hagens Berman Cycling Team Wednesday to earn “best young rider” honors on the opening stage of the Tour of the Gila.

Blevins and teammate Jhonatan Narvaez finished in a group of 32 riders who were six seconds behind solo winner Matteo Dal-Cin (Rally Cycling) in the 143.4-kilometer race from Silver City to Whitewater Mesa, New Mexico. Daniel Jaramillo (UnitedHealthcare Pro Cycling Team) was runner-up, ahead of Colin Joyce (Rally Cycling), a 2016 graduate of the Axeon Hagens Berman program. 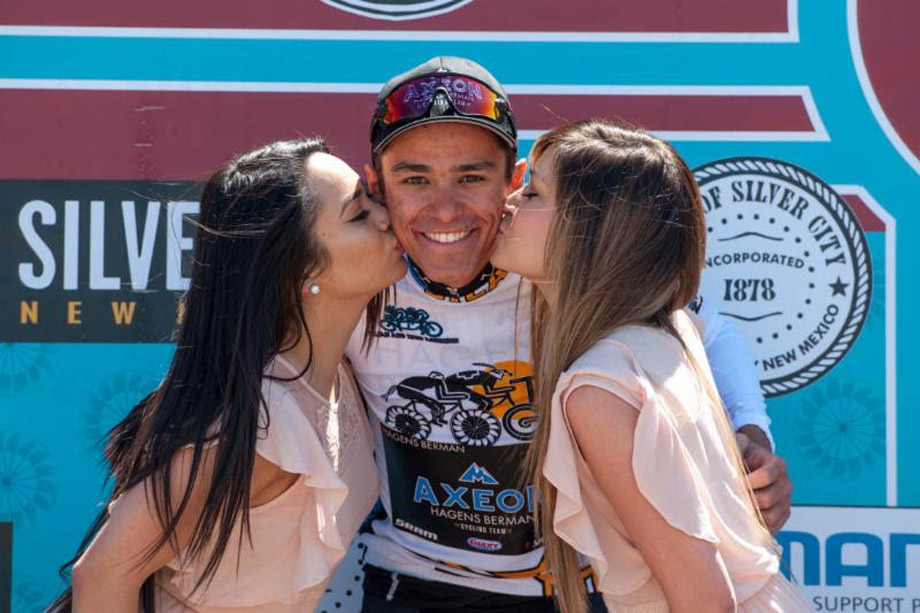 “People were a bit jittery and nervous until the last climb,” Blevins said. “Then it was all out. We did four kilometers from the bottom of the climb to the finish in six minutes. The last two kilometers were flat, so a group of about 20 of us made it over the top of the climb and then it split up from there.”

From Dirt To Road For Blevins
Blevins said he made a smooth transition to the opening stage of the five-day race after several weeks of competing on the professional mountain biking scene. The 2016 junior national mountain biking champion currently leads the USA Cycling US Cup series and already has six wins on the dirt to his credit.

“I felt pretty good, the 19-year-old from Durango,” Colorado, said. “Not as good as I would had liked, but not enough to lose the group in front of me today. I did not have legs for the sprint that well, but still had a decent performance.”

Blevins said if everyone heals up well, Thursday’s stage could be one for the six-rider team to better show its strength. The 120.7 km race starts and finishes in Fort Bayard.

“It is a good stage to try to win for Rice or any of us other guys who can sprint,” he said. “I don’t think defending the best young rider jersey is much of a priority for me. If I lose it, I hope it is to one of my teammates in the time trial (on Friday). Looking ahead, we want to keep Jhonatan and Rice protected for the finishes on the climbing and sprint days.”

Louder said a few teams set the tone on the opening day of the USA Cycling Pro Road Tour event.

“Obviously Rally Cycling is super strong and they have a lot of horsepower here,” he said. “They and UnitedHealthcare both demonstrated today that they are really good. For us, I think Naravaez is feeling good and obviously Blevins, too. Jhonatan will be getting better as he continues to get over his jet lag.”