Ignazio Moser of the BMC Development Team won his first race of the season and teammate Arnaud Grand was runner-up Sunday at the 30th edition of the Shimano Suzuka Road Race in Japan.

Roe Assists With The Chase
With only three-man rosters, the BMC Development Team relied on Tim Roe to help ensure a field sprint at the end of the 10-lap, 60-kilometer race on the Suzuka Circuit race track in Mie Prefecture in central Japan. Moser burst through to take the win off the wheel of the Team Argo-Shimano lead-out for Jonas Ahlstrand, who finished third. “The Argos guys did a lead out for their sprinter and then I sprinted with Arnaud on my wheel,” Moser said. “I’m really happy with this first win and I would like to dedicate it to all the team and especially to (General Manager) Rik Verbrugghe, who always believes in me.” Arnaud said the result was “perfect.” “We did an offensive race because I knew we had the fastest guy,” said the winner of the hill climb and mountain bike races at Torgona Bike in Switzerland earlier this month. “At the end, I just did my best to control the race and make sure the sprint happened. Ignazio was really strong and I got second, so that was a bonus.” Verbrugghe said he was glad Shimano invited the first-year BMC Development Team to participate in the event. “I’m especially happy that we won because it’s good publicity for Shimano to win on the Asian continent,” he said. “So we thank them for asking us to do this race.” 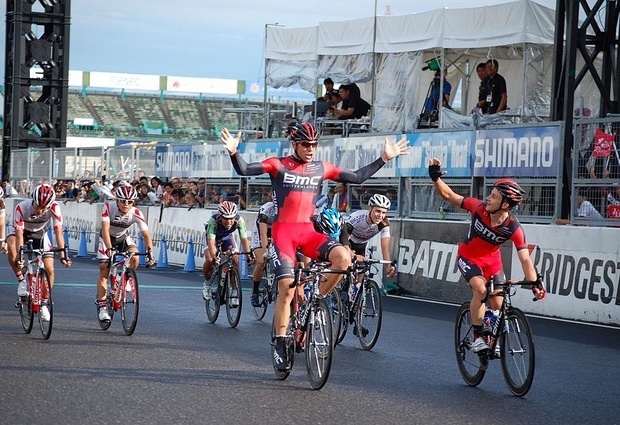