Boom moves ahead thanks to good time trial

Lars Boom moved up to third overall in the Tour of Qatar thanks to a strong time trial today. The Dutchman of the Belkin Pro Cycling Team clocked 13:-39 minutes over 10.9 kilometres. He finished a second too short for the victory, which went to Michael Hepburn of Orica-GreenEdge.

Boom finished ahead of Daniele Bennati (Tinkoff-Saxo) and former world champion Fabian Cancellara (Trek). The Italian and Swiss placed third and fourth. After Boom’s attack in the second stage, he again narrowly missed out on a win. However, he was not too bothered by it. “I was very relaxed going into this time trial,” said Boom. “I didn’t put myself under any extra pressure and it worked. I started off well and don’t think I could have gone any faster.”

Special trick
The peloton had to leave their time trial bikes at home so the team came up with a special trick for its riders: extra tape wrapped around the tops of the handlebars on their Bianchi Oltre XR2 bikes. “That way I was able to bend over a little bit more,” said Boom.

Open-minded
The gap between Boom and race leader Niki Terpstra is now 24 seconds. Lotto-Belisol’s Jürgen Roelandts sits second overall 21 seconds behind Terpstra and three seconds ahead of Boom. “I think it’s important to keep an open-mind during this race and just go as deep as possible every day,” added Boom. “It would be nice if I can keep my third place, though.”

Looking ahead
Boom doesn’t yet know what to expect of tomorrow’s stage. “But I’m going to check the weather forecast so when it comes to the weather and wind I’ll be completely up to date at the start.” 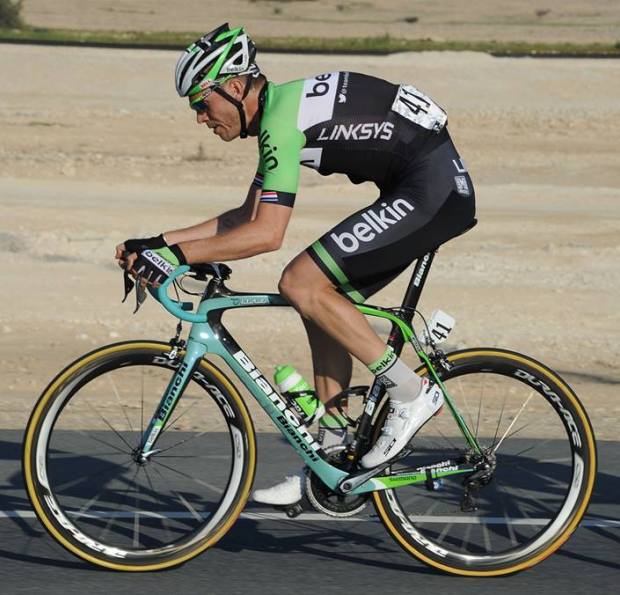