BORA to be new title sponsor for German cycling team

BORA, the manufacturer of cooktops and cooktop extractor systems, will be the new title sponsor of the current Team NetApp – Endura from the 2015 season on. The team, led by manager Ralph Denk, is currently the only German professional cycling team. BORA has committed itself for five years. For the first time since 2010, there will again be a German professional team with a German main sponsor.

“I am delighted to announce that with BORA we again have a German company back in professional cycling as a title sponsor. In BORA we have acquired a title sponsor that is entrepreneur-led, growing healthy, commercially well established and not afraid to compete with its innovations against the big companies. I can see clear parallels with our team. The commitment of BORA demonstrates that we have been on the right path for the last five years”, says Ralph Denk.

“We are a healthy growing company. We now want to present our innovative products to a wider public and we want to support our export offensive. The naming right in professional cycling is an ideal tool for this project. We have established our plan step-by-step in recent years, initially as a partner to the team and now including TV advertising at cycling races in many European countries. Now is exactly the right moment to become the title sponsor,” says Willi Bruckbauer, owner of BORA, explaining the reason for his firm’s action.

After having its name on the jersey of Team NetApp – Endura as a partner since 2012, BORA will take over the first naming right for the team as of January 1, 2015. The contract runs for five years, until the end of 2019. “First of all, we are happy to have secured the future of the team so early and for such a long period. With BORA, we intend to become further established as one of the best ProContinental teams, so that we can get into the new WorldTour in 2017. Only this will enable us to offer BORA the world’s biggest races as a platform for its brand,” says Denk, outlining the strategy.

Along with BORA as the first title sponsor, Ralph Denk has already signed more partnerships for the coming season. It will thus be possible for the squad to take shape immediately at the start of the transfer period on August 1. “During the Tour, the riders should concentrate on their debut in this, the world’s biggest cycling race. There is no time for contractual discussions then. We already extended some contracts before the Tour, others will follow afterwards and we will be recruiting new riders from August 1 on. I think we will be able to announce the first names before the most important German race, the Cyclassics in Hamburg,” reports Denk confidently.

About Ralph Denk pro cycling GmbH
The Ralph Denk pro cycling GmbH, established in 1999, is an operator of cycling teams and the license holder of the current Team NetApp – Endura. Until 2006, it ran mountain bike teams under the name Giant Racing Team, whose greatest successes were second in the world championships and victory in the overall World Cup. It has been involved in road racing in the under-19 age group since 2007, and this team is the current world champion. Team NetApp has been active since 2010 and has been competing as Team NetApp-Endura since 2013. This team achieved the unprecedented move from amateur status to participation in the Tour de France in only 5 years. Ralph Denk, 40 years old, is considered the most successful German cycling manager of a new generation.

About BORA Lüftungstechnik GmbH
Since 2007, BORA Lüftungstechnik GmbH, located in Raubling, Upper Bavaria, has been successfully developing and distributing cooktop extractor systems, which – thanks to a patented technology – draw off cooking vapours in a downward direction. Meanwhile, the innovative product lines BORA Basic, BORA Classic and BORA Professional – exclusively downdraft systems – are distributed in 18 European countries. In 2012, the company expanded into Australia and New Zealand. Already in 2009 the company was awarded within the framework of the innovation contest “365 Orte im Land der Ideen”, winning the “Deutsche Gründerpreis” in the category “StartUp” in 2010, as well as the “red dot award” in 2012. For further information see www.bora.com. 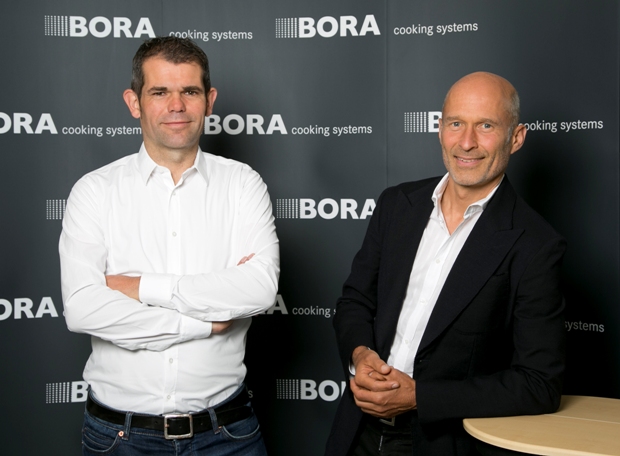