Brett Lancaster has had plenty of practice celebrating his role in teammates’ wins. A loyal domestique and experienced lead out man, Lancaster has become accustomed to sacrificing himself to put a teammate on the top step. Given the opportunity for a personal result on the final stage of the Tour de Slovénie, Lancaster seized it. He sprinted to victory, earning his first win since taking out stage two of the Amgen Tour of California three years ago.

“The team did a perfect job,” Lancaster said. “I couldn’t have done it without them. I crossed the line and wanted to find them right away. Winning because of their work really puts into perspective how important the lead out is for the sprinter. It’s a pretty awesome feeling to finish off the job. I have a lot of respect for the work they did for me.”

Sport Director Matt Wilson suspected stage four suited the strengths of the ORICA-GreenEDGE squad in Slovenia. The 156 kilometre day covered undulating terrain, with two category three climbs in the first half of the stage and a lumpy, technical finishing circuit.

“We knew today would come down to a sprint,” explained Wilson. “Brett has been going well lately. He got some good results in the Giro, and he has a good little sprint. He’s one of our fastest guys here, and with a good lead out, I was confident he could do it. I was happy to give Brett the team’s support after all the support he gives his teammates.”

A break of five riders animated the early action. The peloton kept the quintet at a reasonable advantage.

“We controlled the chase with Lampre and the race leader’s team,” said Wilson. “We brought the move back in the final circuit.”

“Wes [Wesley Sulzberger] and Tomas [Vaitkus] did the work on the front,” added Lancaster. “They started to chase with a few other teams around the halfway point of the stage. The boys came to front when we hit the circuits. Svein [Tuft] started things off with a super strong effort.”

ORICA-GreenEDGE ramped up the speed six kilometres from the finish, keeping Lancaster safe in the technical run towards the line.

“It’s definitely a different mentality when I sprint for myself,” noted Lancaster. “When Gossy [Matt Goss] went home from the Giro, I had to step up and do some sprints. I sprinted two or three times in the last ten days. It went pretty well, which got my confidence up for the sprint today. It was good to have practice to adapt my mind to the sprinting role.”

Lancaster outkicked Maximiliano Richeze (Lampre-Merida) for the win. Keukeleire rounded out the podium.

“We nailed the lead out,” said Wilson. “Putting two on the podium shows how well they did in the sprint.”

“The boys were absolutely perfect,” Lancaster added. “They dropped me off at about 250 metres, and I opened my sprint from there.

“This was a great four days of racing for us,” said Wilson. “We won two stages and were a couple millimetres away from winning three out of four stages. We said we were here chasing stages, not the overall. We said we wanted to target the first and fourth stages, and those are the days we won. We accomplished everything we said we wanted to achieve.” 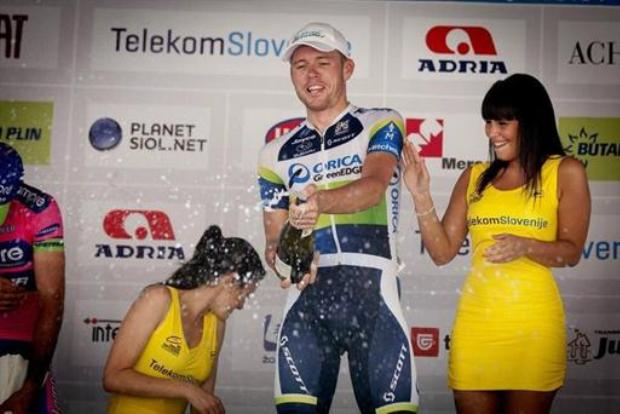