Campagnolo doesn’t produce different grades of performance and with this in mind every product leaves the factory only when it has proven to live up to the Campagnolo quality standard. This range wide performance standard is Campagnolo’s way of ensuring an improved cycling experience for all those who choose its products no matter if they are at the pinnacle of the range or situated somewhere lower. Another factor to consider is the “trickle down” effect of top-end technology and solutions originally designed for the benefit of our World Tour level athletes. This effect brings several technologies found on Super Record to more accessible groupsets in the Campagnolo range and there is no groupset that has benefitted more from this than the newest group in the Revolution 11+ family: POTENZA 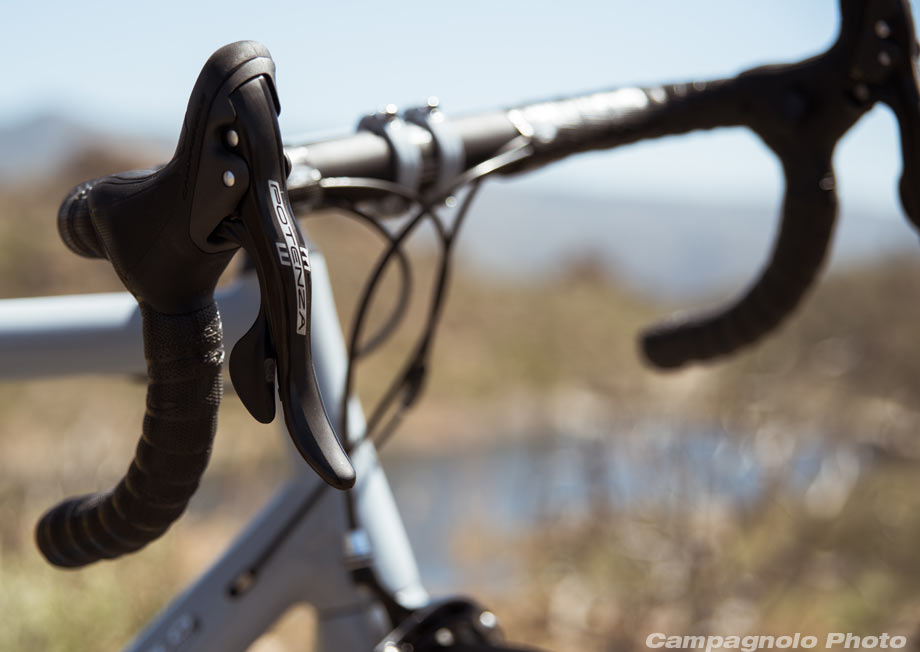 Potenza, which in Italian is a noun which means strength or power, is designed around the strengths that made its higher tier Revolution 11+ brethren so successful. So evident is this shared DNA that many components of the groupset will require a close look beyond the logo to identify any significant difference which often is represented by a mere change in material. 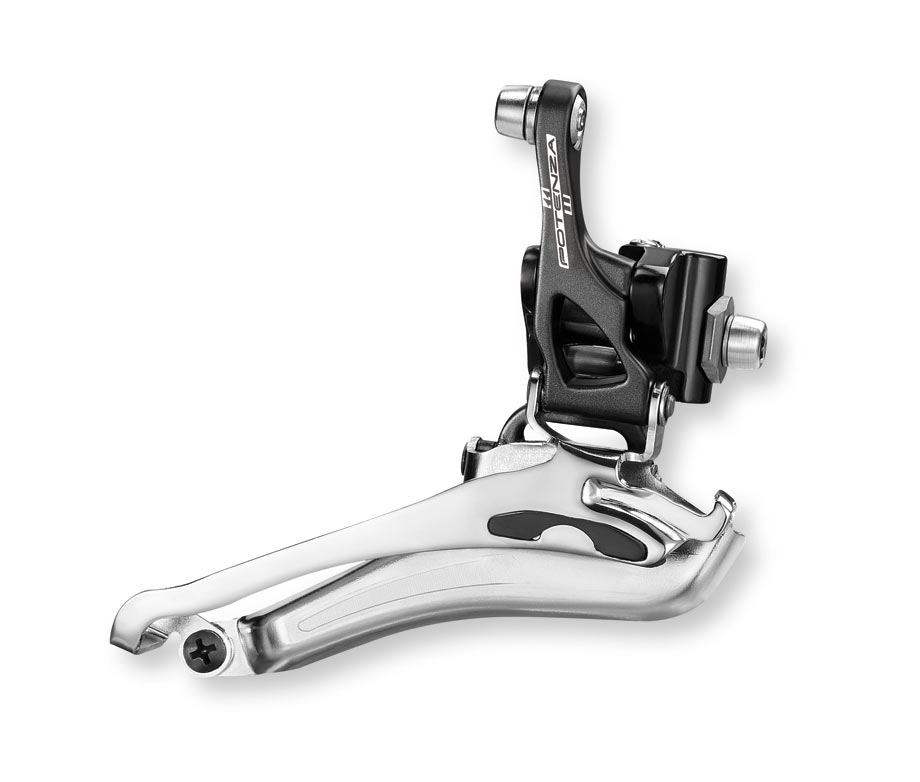 The Potenza front derailleur for example boasts an upper body that has a design nearly identical to that of the Super Record mechanical model complete with longer arm to ensure less effort required to derail to a larger gear. One of the only differences that can be immediately seen comes in the form of the newly developed one-piece steel cage with a similar shape to the Super Record version. Potenza is similar in design yet incorporates different materials to ensure derailing performance on par with Super Record. 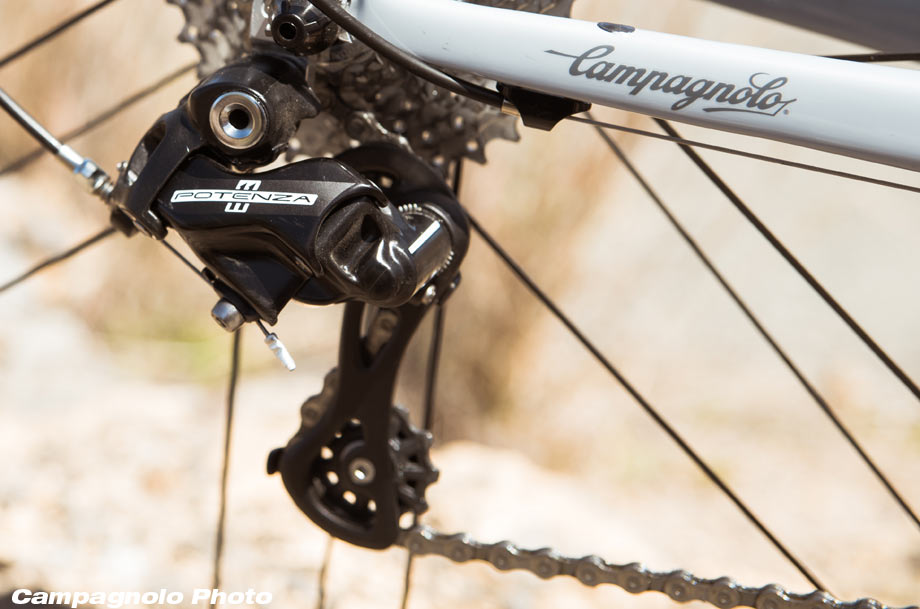 The rear derailleur also takes a great deal of inspiration from the recently launched Revolution 11+ drivetrains and guarantees a similar degree of shifting performance as a result. Changing only the materials used in its construction the Potenza rear derailleur is capable of shifting with the precision and speed of the Super Record version with the only compromise coming in the form of weight. In addition to the form and structure of the component Embrace Technology, introduced on the Super Record, Record and Chorus groupsets launched last year has been incorporated into the performance of the Potenza rear derailleur. The form of the external pieces allow the rear derailleur to move at a different angle and the internal design pulls the chain closer to the cassette. This translates into better power transfer, more secure grip, better chain/cassette interface and a longer life for consumable components. The chain will grip more teeth (when compared to rear derailleurs without Embrace Technology) and as a result disperse energy across a larger surface area, increasing the life of the cassette and lengthening the lifespan of the chain as well. By allowing the derailleur to work closer to the cassette in every position the athlete can now take advantage of perfect alignment between cassette and rear derailleur in any given gear. The internal structure of the original Revolution 11+ rear derailleur was modified slightly to produce the Potenza version in order to offer the same fantastic transmission while accepting larger gearing up to a 32 tooth cassette.

The rear derailleur will be available in two versions; one with a 55mm cage and the other with a 72,5mm cage designed to be compatible with the all-new 11-32 cassette.

The 11-32 cassette signals the introduction of not only a new, lower gearing cassette, but also a new range of cassettes which are labeled “Campagnolo 11” and are to be available in the following combinations: 11-25, 11-27, 11-29, 11-32 and 12,27. These new cassettes are based on a design with one triplet and 8 single sprockets with aluminum spacers and will be compatible with the rest of the range (aside from the 11-32). 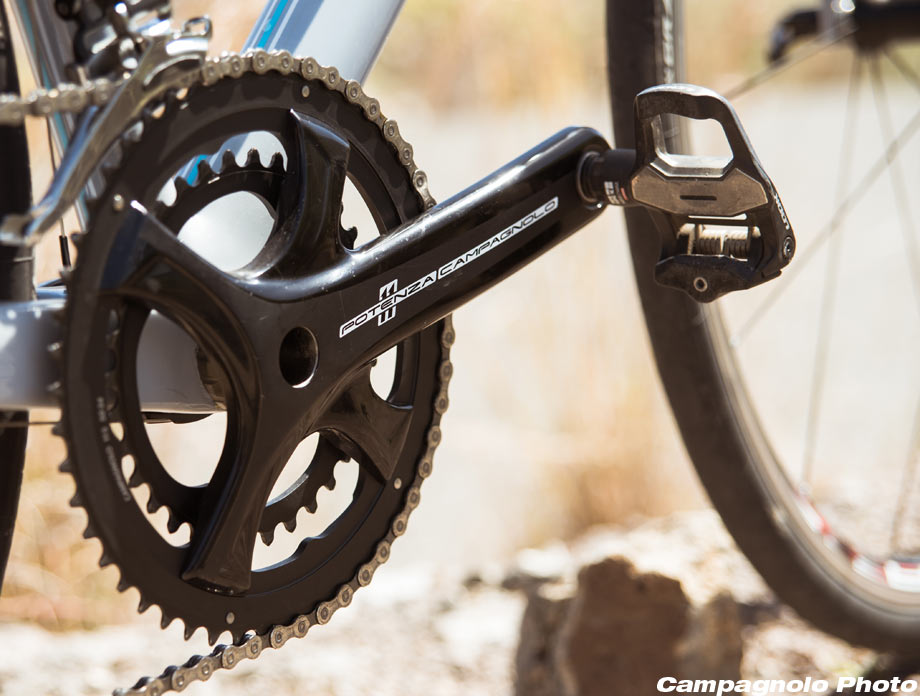 The design of the 4 arm carbon fiber cranksets that so well identify the Super Record, Record and Chorus groupsets has also found its way into this fantastic new groupset, albeit in an aluminum construction. The Potenza crankset is made with both left and right crank arms in hollow forged aluminum to keep weight to a minimum while maintaining the same performance characteristics of its carbon fiber counterparts. Potenza’s 4 arm spider design makes for one single crankarm for all chainring options thanks to its unified bolt pattern which allows for all 3 chainring standards 53/39, 52/36 and 50/34 to be built upon the same crankset. Changing between compact and standard with the Potenza groupset is as easy as changing 8 bolts and two chainrings.

While the new 4-arm bolt pattern offers advantages in terms of practicality, the Campy Tech Lab designed it primarily with performance characteristics in mind. The 8 bolt pattern with a spider arm design that not only holds the chainring in place by way of the bolt but also supports the chainring and in doing so, increases system rigidity to the pint of surpassing its direct competitors in laboratory tests. This Potenza performance cranksets will be available in 170, 172,5 and 175 crankarm lengths as well as in all three chainring configurations 50/34, 52/36 and 53/39 .

With so much talk of performance one may forget about the all-important aspect of control. The Potenza Ergopower commands maintain the fantastic ergonomics of the entire Campagnolo Revolution 11+ line offering a grip and control that is identical to the versions the professional riders demand. While the ergonomics have been maintained, the hypoallergenic silicon material hoods have been slightly altered in order to off an even better grip and comfort. The internal mechanism that permits the Power-Shift function has been modified and improved to offer not only increased performance but also unrivaled durability. Power-Shift permits one single downshift at a time and this function permits the incorporation of an internal lever on both left and right Ergopower commands that is identical to the widely appreciated ergonomic controls of the EPS commands. The downshifting action for the front derailleur is blocked at one click to avoid any issues of dropped chains. Upshifting is possible at up to three gears with one single action and the new Ergopower internal mechanism, together with the new front derailleur, make upshifting a nearly effortless action. A 3 click movement ensures greater efficiency in upshifting and a reduced range of motion necessary for the user.

In summary, the newest addition to the Revolution 11+ family comes in the form of the Potenza groupset and just as its name implies, its strength is helping you power your way to the finish line.