Alex Howes and Wouter Wippert delivered a one-two punch for Cannondale-Drapac on the third stage of Tour of Alberta. Sunday’s result follows Wippert’s stage two victory on Saturday and propels Howes up to third overall with one stage left to race.

The American is now tied on time with teammate Tom-Jelte Slagter in fourth, 31-seconds down on race leader Evan Huffman (Rally). Wippert moved into the sprint classification points jersey.

“The win is yet another confirmation that when we ride together as a team, great things happen,” said Howes. “Here in Alberta, we are riding really well as a team. Yesterday every single rider on the team made a massive contribution to the final result. With everyone pitching in and the wins following, the morale is quite high.”

Sunday’s stage three consisted of 11 loops around a flat 10.6-kilometer circuit in downtown Edmonton. Two riders slipped away early on the 116-kilometer stage, but the move was shut down within a lap. A five-rider escape formed on lap five and gained a maximum advantage of 1:15.

“We wanted to make it a difficult race and look for opportunities but mid-way through we shifted gears and were all in for Wouter,” noted Howes.

“Compared to yesterday, today was a bit more organized,” added Wippert. “The loops made it easier to control. It was a good stage for us, and we went into the race knowing we had a good chance in the sprint.”

Cannondale-Drapac allowed first Rally, riding for Huffman, and then Holowesko-Citadel, looking to set-up John Murphy, assume responsibility for the chase until the final two laps. The peloton reeled in the breakaway just before it heard the last lap bell.

With 500 meters left to race, Howes moved to the front with Wippert on his wheel.

“In the final, Wippert had a look around and told me to go,” said Howes. “His awareness in the final is what really made my victory possible.”

“I let a gap open, and he took an even bigger gap,” Wippert added. “After I knew he was safe, I could do the sprint for second place.”

Tour of Alberta concludes tomorrow with another circuit race in Edmonton. Cannondale-Drapac have a sprint jersey to defend and another stage to target.

“We’re hoping for a sprint again,” said Wippert. “A third stage win is for sure the goal. That would make a good week even better.” 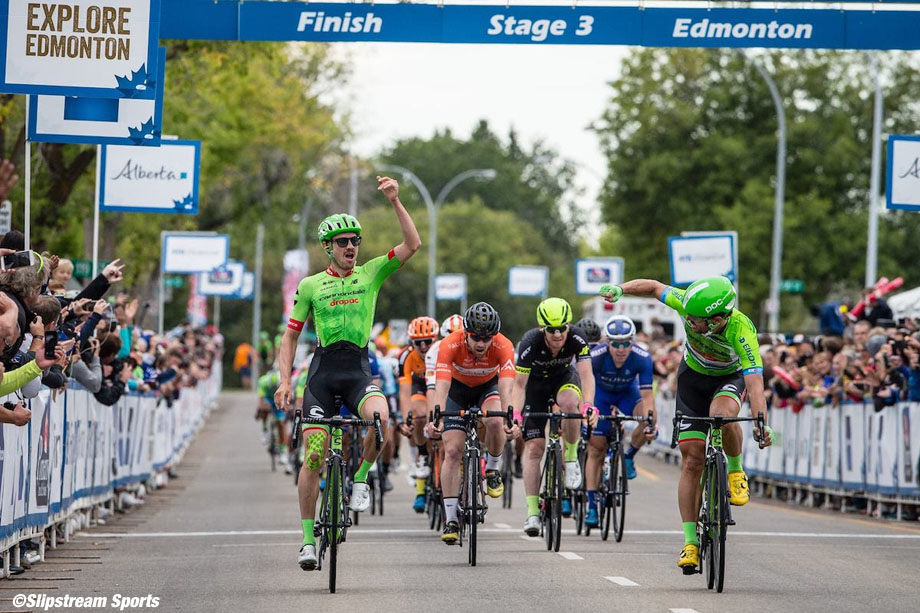 Wippert sprints to first win in #GreenArgyle at Tour of Alberta

UAE Team Emirates to the GP Quebec and GP Montreal