03 September 2013 (Fonzaso, Italy) – Castelli has signed an exclusive partnership agreement with Team MTN-Qhubeka p/b Samsung for the 2014 and 2015 seasons. The sponsorship is further evidence of the Italian brand’s dedication to making clothing that provides a competitive advantage. 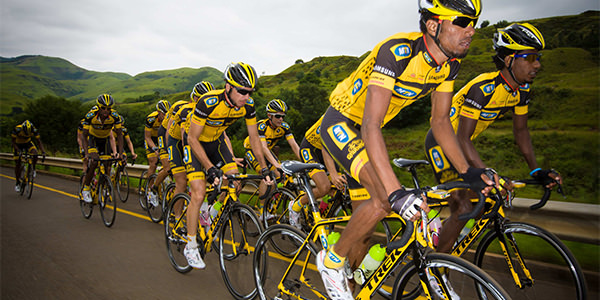 Team MTN-Qhubeka p/b Samsung is Africa’s first UCI-registered Professional Continental team. With its dedicated approach to scientific coaching and embrace of technology, the team has had a highly successful debut in world cycling. The team kicked off the 2013 season with a win in Milan–San Remo, on the way to 11 other victories so far this year.

Castelli brand manager Steve Smith says, “Castelli wants to partner with Africa’s Pro Conti cycling team to push our innovation and performance wear to the limit. Castelli has created the best cycling garments on the market by working with teams racing at the highest level, and it’s exciting to take the next step and see if we can help the riders from Team MTN-Qhubeka perform better in our garments. We saw this spring that some of the team’s African riders were freezing on the bike, since many of them are not used to dressing for the cold of Europe in the spring. This partnership will help us improve our products for racing and riding in cold conditions.”

Team MTN-Qhubeka p/b Samsung team principal Douglas Ryder says, “It’s exciting for us to enter this partnership with Castelli. Castelli leads in innovation and performance, and we are incredibly happy that Castelli wants to work with our African Pro Conti team as well as the World Cycling Centre Africa feeder team and help our riders cope with the demands of international racing conditions. Product development is a key component of the partnership, as is the Qhubeka project, which will benefit through contributions from global retail sales of the team clothing.”

Team MTN-Qhubeka p/b Samsung rides to raise awareness for Qhubeka. Qhubeka is a nonprofit organization that gives bicycles to people in return for work they do to improve their communities, benefit the environment or advance their schooling. To date the project has provided 40,000 bicycles in southern Africa.

“It’s the Qhubeka project that differentiates this team from the others. While everyone likes winning,
with this team the goals go beyond the race to helping change people’s lives,” says Castelli vice president Dario Cremonese.

Castelli will continue with its close partnership with Team Garmin-Sharp for the 2014 and 2015 seasons.

About Team MTN-Qhubeka
Team MTN-Qhubeka powered by Samsung is Africa’s first UCI-registered Professional Continental team. The team’s progression has been on track since MTN’s involvement in 2007 and culminated in 25 UCI victories in 2012. The team is passionate about changing lives in Africa and giving the continent’s best cycling talent an opportunity in professional cycling. Through Qhubeka, the team races to mobilize people in Africa by putting them onto bicycles. The Qhubeka initiative to date has distributed over 40,000 bicycles in southern Africa. The team’s foundation is to discover and develop African talent for the future. The dream is to develop Africa’s first World Champion. With an average rider age of 24 years old, the team is one of the youngest Professional Continental teams. In 2013, the team shocked the cycling world when it won the longest one-day classic on the calendar, Milan–San Remo, after receiving a wildcard invitation.