Movistar Team up to 12 victories in 2013 -with Rui Costa still to compete in Portugal this evening- with victories in Spain and Great Britain prior to this weekend’s road races.

Movistar Team continue with their sensational season as they added two new victories to their season tally, with Alex Dowsett and Jonathan Castroviejo winning the TT National Champinoships in Great Britain (Ayrshire, Scotland) and Spain (Bembibre). The two triumphs take the accunt to 21 so far, a figure that could still be increased today as Rui Costa takes part in the Portuguese national TT. Saturday and Sunday will bring the road races, with Szmyd (Poland), Karpets (Russia), Dowsett (Great Britain), Capecchi (Italy), Costa himself in Portugal and the 16 Spaniards heading to León.

Thursday evening saw Alex Dowsett making history by becoming the first-ever rider to win three consecutive British time trial championships. The Movistar Team, Essex-born rider proved to be superior into the 48km course in southeast Scotland despite a crash that caused him wounds in his legs and arms and forced him to change bikes. Dowsett, who had a significant gap over his competition before the incident, was able to hold off his rivals and win with twenty-one seconds over Matthew Botrill (D2Z) and Ben Swift (SKY).

In turn, Jonathan Castroviejo conquered at last his long-awaited ‘rojigualda’ jersey -he had been 6th in 2009, 5th in 2010 and 2nd in the last two editions- in the Spanish TT held over 44km, the Basque showing strength and constance from the first intermediate times, where he kept big favourite Luis León Sánchez (BLA) behind before eventually beating him by 45 seconds. The great performance from Movistar Team was complete with Rubén Plaza claiming the bronze medal -back into the podium after silver in 2006 and 2008-, Alejandro Valverde’s 5th place -just 15 seconds off the podium in his last TT before the Tour-, Eloy Teruel 6th and Jesús Herrada’s 7th, with all Movistar Team riders within the best ten in the race.

REACTIONS:
Jonathan Castroviejo (Spanish ITT champion): “I found myself really strong all day. I had finished twice second in the last two years but I came in better physical condition to this year’s race, with the only goal of winning the race. It was a beautiful course and a technical one – you had to distribute your energy well over it. There was a steady climb in the beginning and you couldn’t give everything there. Then, there was much wind halfway through the course and it made it harder – it was the crucial point to win or lose, because the final part was almost downhill, and a matter of keeping the gaps. I had all references I needed and knew that I had to keep calm into the climb. I did and came through it with the same time as ‘Luisle’ – since that point, I kept taking time on him. After my TT in Dauphiné, I was quite confident, and I proved today my condition was good. I’m feeling well these days and I hope to do well in the Tour.”

Alex Dowsett (British ITT champion): “I’m really happy – it’s not easy to win three times in a row. When I claimed the first one, Wiggins told me I had to take care of it, and to be honest, I feel really committed to it and it’s becoming my favourite jersey. It was a hard one, because even though I got back well after the crash, I had some wounds in my hands and couldn’t grab the handlebars well. I don’t know what really happened, but it might have been a problem with the front tire. Besides, I lost my powermeter and didn’t know how I was doing. It’s the first time I crash into a TT, and it’s important to look at the watts all the time. I also had pain in my elbow, but my pedal stroke was good, I was going well and had no other option but suffering until the end. I did a great Giro, now this championship… this season is being a really great one and I hope to stay like this for the remainder of the year.” 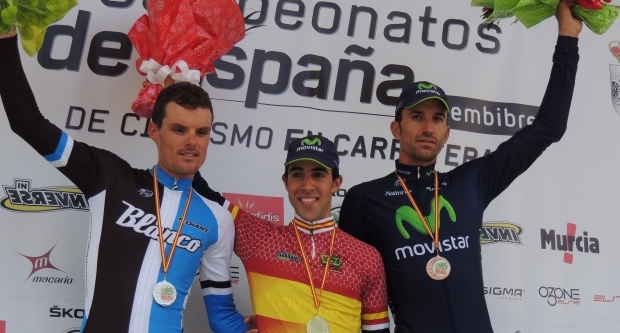