The third day of CBRE CYCLE TO MAPIC 2014 dawned clear and dry for the cycling contingent of the retail property industry. With just over 100km to cover, the riders were raring to go, despite talk of the 2,000m of climbing that lay ahead.

The three mile climb straight out of the hotel warmed and woke up sleepy bodies, with riders finding their own pace and invariably, a riding companion to talk to as they rode. The views were spectacular: the peloton climbed above the mist line up the side of a terraced wooded valley shrouded in with olive groves, farms and greenhouses, with views of the distant sea off to the left.

The reward was an incredibly tight and twisting descent, with hairpin after hairpin to negotiate before the riders reached a pretty village hugging the side of the hill. From the bottom of the valley, the peloton followed a river swollen by flood water, heading towards Ventimiglia, through a series of long coastal tunnels. At the exit of each tunnel, the sun became brighter and warmer, and as the riders crossed into France the coastline became more populated, dotted with palm trees, waterfront cafes, glamorous hotels and multicoloured villas and high rises. After the morning’s coffee stop at Menton on the Cote d’Azur, it was time for the next leg of the morning: aiming for lunch at Valbonne.

The 60km to Valbonne was a series of rolling climbs and swooping descents along the coast road toward Nice, through tunnels hewn from solid rock. The views were stunning: the whole of the French Riviera was laid out ahead, marinas with superyachts and sailboats nestling in sparkling turquoise waters to the left. The peloton passed briefly into the principality of Monaco as it skirted Monte Carlo, where new developments in the city attracted the attention of a number of the cyclists.

In Nice (or Nice la Belle – Nice the Beautiful – it’s official name), the stop-start through the Tuesday morning traffic provided a chance to admire the gilded ornate architecture of the city. At Cagnes sur Mer, the road turned inland and it was time for another climb. A long, steady 10km ascent took the riders out of the city and onto a country road dappled by sunlight and flanked by woodland, that twisted and turned all the way towards Opio. The Ride Captains kept the group together and it worked as one, putting into practice the skills honed from the previous days’ riding, to arrive at the top together. From the top (marked by the “English Garden Centre”, which somewhat incongruously seems to sell nothing but olive trees), it was a steady run to a courtyard restaurant in medieval Valbonne, where lunch awaited.

From lunch it was a short 15km run towards Cannes. There were a couple of little climbs to contend with but the riders could sniff the sea air and taste the finish and they encouraged each other onwards, with helping hands to provide a little push where needed. After we were safely escorted through the bustling main roads of central Cannes by the French moto team, the riders turned onto la Croisette and from there to the Palais des Festivals, where colleagues, friends, family and journalists awaited. Many photographs and a medal ceremony later the riders headed to Cafe Mocca for a celebratory beer.

Malcolm Dalgleish, EMEA Retail Chairman at CBRE UK, commented, “This was another great CYCLE TO MAPIC: more challenging than last year due to the weather on the second day but it helped the group to gel. The support team was magnificent in sorting out the problems presented by the weather and road conditions. Whilst it presents a significant test, this event is not an ordeal: it provides an opportunity to ride through beautiful countryside on quiet roads, and arriving in Cannes is always a pleasure, especially when the weather is good.” 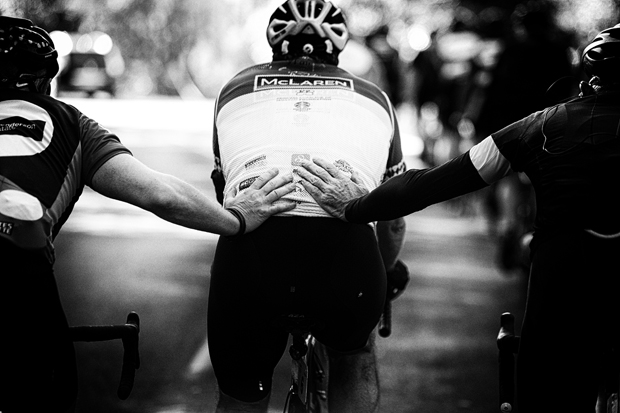