After the dramatic thunderstorms on arrival day, day one of CBRE CYCLE TO MAPIC 2014 dawned dry and clear. The great and the good from the retail property industry gathered in the courtyard of the Grand Visconti Palace for a final check of their bikes, the day’s briefing and some group photos. Three teams in jerseys of green, dark grey, blue, grey and black – CBRE, Henderson, Citygrove, McLaren, and Estates Gazette – face 450km of cycling from Milan to Cannes over the next three days, to arrive in time for the start of the MAPIC retail property conference on Tuesday.

The peloton made its way through a quiet Sunday morning in Milan. Forming up in pairs under the experienced guidance of CYCLE TO… veterans and Ride Captains Sam McClary and Barry Spencer Hughes, the riders were followed by a support crew that includes logistics, therapists, mechanic, paramedic and photographer. Further support was provided in the form of French moto outriders who kept the peloton rolling through the city’s major junctions.

Leaving Milan behind them, the cyclists headed south through flat, agricultural landscape, warmed by the gentle November sunshine. It provided an opportunity for further introductions for riders who did not have a chance to meet at the previous night’s introductory dinner.

The pace was fast but steady to give everyone a chance to warm up and to learn how to work together in a group. Some of the riders have not ridden in a peloton before so the morning is a good chance to learn the etiquette of group riding – and with some road surfaces leaving a lot to be desired in places, it was a valuable lesson for the greater good.

The first coffee stop took place in a bustling market town where the locals admired the bikes and the riders enjoyed espressos whilst posting photos on Twitter (take a look at @cycle_to_events).

For the second leg, the weather turned misty and the temperature dropped and the cyclists practised through and off to take their turn on the front. The scenery was not typically Italian but the brutalist architecture of the concrete hinterland and derelict industrial warehouses were a talking point. Roadside Therapy provided quick treatments for those in need a the stop for lunch: primo pasto (pasta), secondi piatti (meat) and torts di mele (very good apple cake) with more espressos.

Post lunch, the road became more varied for the slightly full cyclists. The architecture travelled back through time from flat fronted high rises to medieval towns as the ride approached the first mountain pass of the day, the Passo del Turchino, known for its annual appearance in the Milan-San Remo one-day cycle race.

From the foothills of the Passo del Turchino, the peloton strung out a little more and the Ride Captains decided to let the riders take the 16km climb at their own pace. The peloton followed the natural curves of the road sinewed through the foothills, passing through small towns and crossing brown rivers swollen from the recent rain. As the road climbed, the wooded terrain opened out and were illuminated in shafts of early afternoon sunlight.

At the summit, riders arrived in ones and twos, exhilarated, exhausted and very happy. For those at the back there is support from the stronger cyclists. The help and encouragement that riders give each other is one of the elements for which CYCLE TO… events are renowned thanks to the sense of camaraderie that is built on the road.

After cake and more coffee at the top, it is then time for a sweeping 10km alpine descent down amongst the trees, followed by a short run into Arenzano with the sea to the left and a stunning sunset ahead. 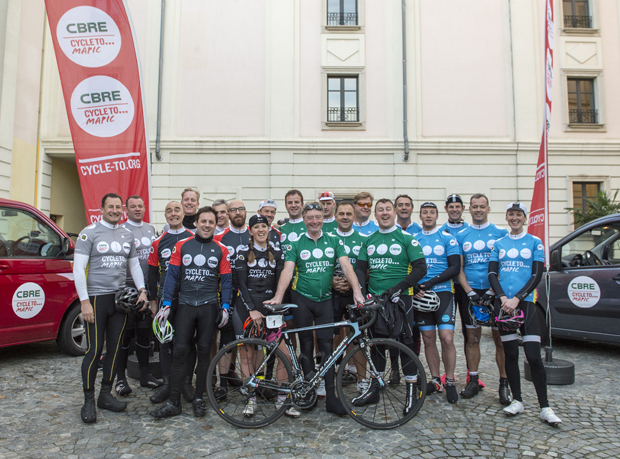 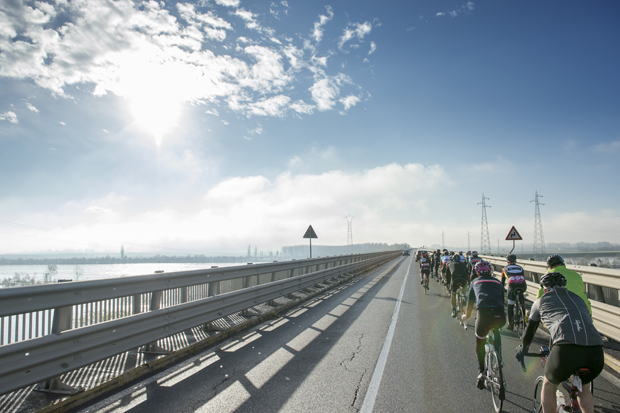 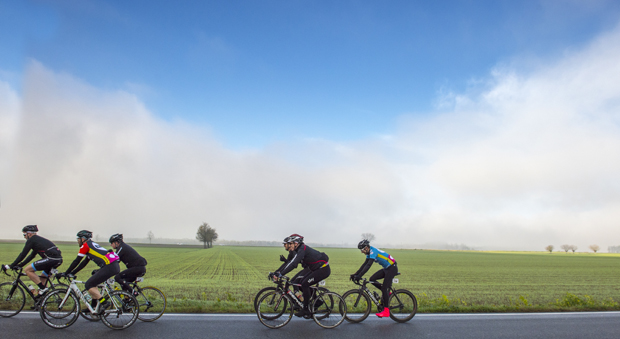 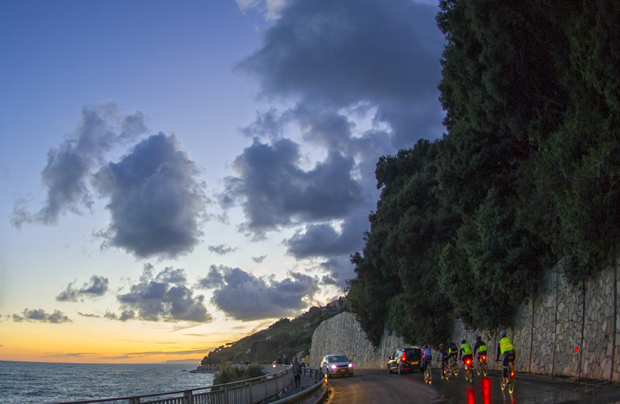