The Champion System Pro Cycling Team will close out its season with a pair of one-day races in Japan this weekend, followed by the nine-day Tour of Hainan in China, which begins Sunday.

“The circuit race is pretty hard,” Beamon said. “I think Chad is our best guy on that circuit, but we will also try to have as good of a showing as possible for Ryoto Nishizono, who is riding pretty well.”

Tour of Hainan
The parcours for this year’s Tour of Hainan lends itself to the sprinters, Beamon said, so he selected a roster that can hunt for stage wins, but still can handle the climbing.

“It’s not a pure climbers race; there are always a lot of sprinting stages,” Beamon said. “We will look for Mart Ojavee and Fabian Schnaidt to go for some stage wins.”

Beamon said several stages would be decisive – particularly Stage 7, which includes a climb to the city of Wuzhishan.

“There are three or four stages that have climbs that might create some selections, which I’m hoping Pengda Jiao can be fast enough to sprint out of,” Beamon said.

Rounding out the seven-man roster are Chinese riders Gang Xu and Biao Liu, plus American Chris Butler and Gregory Gazvoda of Slovenia. Butler is one of the team’s core climbers and finished seventh overall at last year’s edition.

“Butler is motivated for this race, but I just don’t know if this year’s edition will be selective enough for him,” Beamon said. 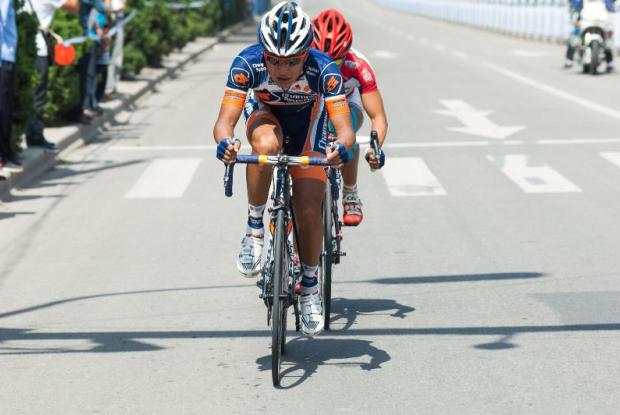 Biao Liu is part of the Champion System Pro Cycling Team’s seven-man roster for the Tour of Hainan.
(Photo courtesy of Tour of Qinghai Lake.)

CompuTrainer: And The Winner Is!