Champion System Pro Cycling Team’s Mart Ojavee earned his best result of the season to date with third place on Sunday’s opening stage of the Tour of Korea.

“Our goal was to win the stage, but I was happy to see Mart in the front group and make the podium,” Champion System Assistant Director Chris Wherry said.

Ojavee – former Estonia road race champion whose last podium finish was at the Tour of Taiwan in 2011 – said that the race’s three categorized climbs made for a challenging stage.

“I was really hoping to get the stage for the Champion System team today,” Ojavee said. “It was really a pretty hard stage and the climbs in the middle of the race created a lot of separation in the field, but I’m feeling pretty good now and was happy to make the front group.”

The windy, 172-kilometer race from Cheonan to Mujun began with a flurry of attacks, all which were eventually pulled back. Following the race’s only intermediate sprint, a group of five riders escaped and built a lead of 1:40. A chase group of 20 riders quickly formed and, with 35 km to go, Champion System’s Ojavee and Constantino Zaballa (Christina Watches-Onfone) took control and quickly reduced the group to just seven riders.

Champion System’s Chan Jae Jang – the Korean national road champion – missed out on the final break and crossed the line 28th, 3:09 behind Sbaragli.

“Unfortunately, Chan Jae did not make the final group of six and lost a bit of time,” Wherry said. “But there is still a lot of racing left.”

The eight-day stage race continues Monday with a 138.1-km stage running from Muju to Gumi and featuring two categorized climbs. 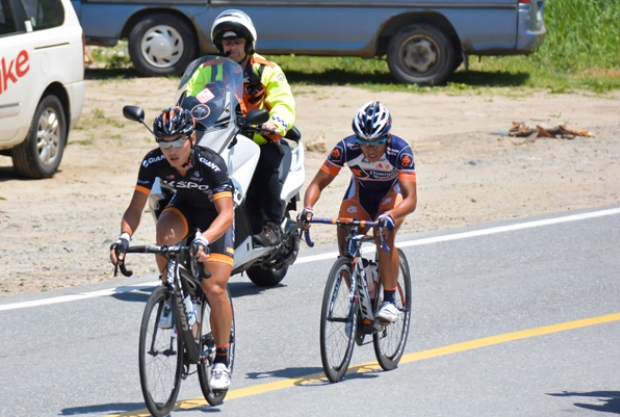