In the absence of soon-to-be-retired Jens Voigt, defending champion Chris Horner who will turn 43 in October will be the oldest rider of the Vuelta a España once again. He surprised everyone and made himself very popular in Spain one year ago as he showed that age is just a number – or “a concept” as he likes to say – when he dethroned Vincenzo Nibali at the end of stage 19 at the Alto del Naranco with two days to go into the 68th edition of the Spanish Grand Tour.

Now questioned about the value of his performance in 2013, he’s prompt to respond: “Look at who I beat!” Nibali has become a Tour de France winner since but Horner’s life in cycling hasn’t been exactly a smooth one in the past ten months. He struggled to find a team and eventually joined Lampre-Merida in January. He was set to ride Giro and Vuelta but he was hampered by an accident in April. While training near Lecco in the north of Italy, he was hit in a dark tunnel by a Range Rover driven by a 70 year old man who didn’t stop to help. “If another car or a truck had gone through the tunnel when I crashed, I’d be dead. I was lucky. In a moment of bad luck, I was very lucky”, Horner said at the time.

Having skipped the Giro, he resumed racing at the Tour of Slovenia just before the Tour de France where he lined up with the aim of helping Rui Costa. The world champion eventually pulled out ahead of stage 16 following an outbreak of pneumonia. Horner took over as the leader of Lampre-Merida and ended up 17th overall.

“I’m pretty happy to have finished the Tour in the top 20 after having seen so many obstacles in front of me”, he declared. “I’ve had a big accident before the Tour, I was working for Rui Costa until he pulled out. Everything was falling apart. We had to race through the pavés. I’ve been sick during the Tour. I’ve had to get rid of the green phlegm in the lungs. Once I became sick, it was hard to race on the flat. I preferred to climb!”

Horner was seen in action as he was first rider to attack from the yellow jersey group on the way up to Hautacam. Nibali countered him and went on to win stage 18. The Italian admitted later that he moved earlier than planned because of the identity of the attacker. “My acceleration helped Nibali to win”, Horner said. “There’s no rivalry for me but maybe he remembered the Vuelta last year…”

“At the end of the Tour, I was just happy to find my way home safe”, the American said. “In Oregon, I’m in altitude and I’ll come back to Europe to ride the Vuelta. I want to be back 100% healthy after racing the Tour of Utah like last year.” Horner was definitely the freshest of the GC contenders last year following a long recovery after another bad injury. This time around he has completed the Tour de France and he’ll face different rivals but he believes he can win again.

“My main concern isn’t who I’ll be racing against”, he added. “I love to race against Chris Froome and Nairo Quintana who are the favourites this year. My problem is time trialing. Because of the time I lose against the clock, I need to make it up in the mountains. And I love the Vuelta because there’s a lot of space for climbers. I love Spain. I love the atmosphere. I’m looking forward to be there again. It’s going to be spectacular. I’m excited.” 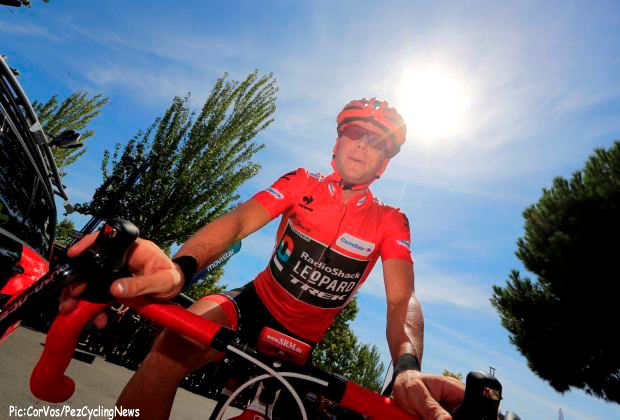