ORICA-GreenEDGE is pleased to announce that Christian Meier will be returning to the Australian registered squad for another two years. During his two year stint with the team, Meier has perfected his role as the Mr. Dependability in nearly every race situation.

“It is great news that we’ve re-signed Christian Meier,” said Sport Director Matt White. “I’ve had a long relationship with Christian extending back to my Garmin days. He’s one of the first guys I brought across to GreenEDGE.”

Although Meier may not be the rider getting results, his teammates wouldn’t be scoring big wins without his help. Meier can tick off highlight after highlight in which he played a key role in the team’s success.

“The first Giro, when we won a stage with Gossy, was a huge victory for the team,” said Meier. “It was a really cool to contribute to that moment.. Last year, to be part of Luke’s [Durbridge] win at Poitou Charentes, sticks out in my mind. It may not be the biggest race, but it was nice to be a part of a win for a guy with a huge future.”

“There are so many moments with this team, it’s hard to name them all,” Meier continued. “Last year we had such a successful year, and this year has been hugely successful as well. We’re not usually the strongest team on paper, but we accomplished some really big goals with the way we ride.”

White has a deep appreciation for the role Meier plays amongst his teammates. Meier’s consistency, humility and dependability make him an ideal addition to the roster at nearly every race.

“Every team needs someone like Christian,” said White. “In the make-up of the team you have your winners, your developing riders and then guys like Christian who can support either group. We can put Christian in any race on the calendar between January and October, and we know exactly what we’ll get from him. He’s one of the first guys we slot into any roster because he’s very stable and very consistent. His work is hugely appreciated from the start of the race until its end.”

Meier cherishes the role he plays at ORICA-GreenEDGE. He found no reason to shop teams for the upcoming season.

“For me the question isn’t ‘why stay?’, it’s ‘why leave?”, said Meier. “We have a great group of people to work with – riders, staff and sponsors. All our equipment is top-notch. That’s a pretty big deal for performance. The team has invested in sport science, too. We’re always right on the leading edge of training, recovery methods and nutrition. The team gives us all the tools we need to grow and get the best out of ourselves. I don’t want to be anywhere else.”

As Meier looks ahead to the next two years with ORICA-GreenEDGE, his personal ambitions remain modest. For Meier, his victory is defined by the team’s success.

“I want to continue to grow as a rider,” said Meier. “On a personal level, the longer I am with the team and doing my job well, the more the team leaders will learn to trust that when I do my job, they can do their job better.”

“When I was younger, I never really aspired to be a huge champion myself,” Meier added. “Sure, I wanted to win some races but I never thought I’d win the biggest races in the world. Working with guys like Gerro or Gossy [Matt Goss], who can achieve those big victories with my help, makes me feel like I have achieved something myself.”

Although he downplays his personal accomplishment, Meier has found ways to make his mark in key races while fulfilling his domestique duties throughout the course of the season. He won both points classifications at Volta a Catalunya this season after repeatedly riding the break, finished in third overall at Tour de Beauce in 2012-2013 and second in the Canadian National Time Trial Championships four times. Winner of the Canadian National Road Championships in 2008, Meier hopes to repeat the feat sometime in the next two years.

“I would love to win another national title,” said Meier. “I’m also hoping to make the Tour de France team sometime in the next two years.” 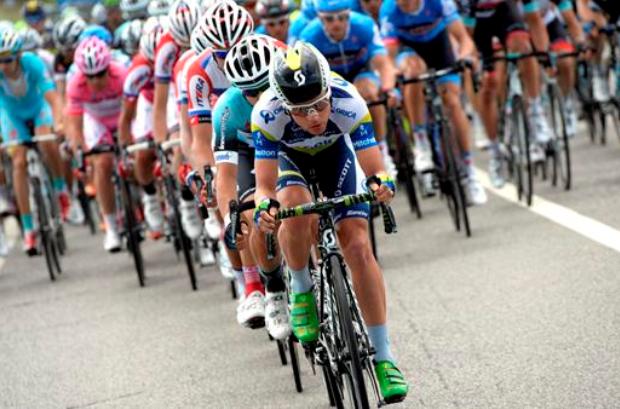 Best of PEZ: That Memorable Meal