Christophe Riblon is the King of the Passo Pordoi

Places of honor went to Austrians Thomas Rohregger (Radioshack) second, and Georg Preidler (Argos-Shimano) third. Colombian Sergio Henao (Sky) was fourth and fifth place went to Poland’s own Rafal Majka (Saxo-Tinkoff) who was already in the best group yesterday at Madonna di Campiglio, in a position good enough to make him the new Skandia yellow jersey in the general classification. Majka now leads the GC with 4” over Henao and 6” on Riblon.

This truly Dolomite super stage was spectacular and well fought from the very first kilometers. The peloton took off right on time at 10:00 a.m from Marilleva/Val di Sole to confront the 206.5 km route featuring two, category 1 mountain GPMs, the intimidating Alpe di Pampeago and the Passo Costalunga, before the final ascent to the Pordoi.
The race was fired up by a group of attackers including the king of the 2013 Giro, Vincenzo Nibali, who took advantage first of the continuous ups and downs along the hills in the Val di Sole and Val di Non, and then headed up along the Val di Cembra and the Valle di Fiemme to light up the race. And it was this group that launched the riders who stayed in play for the stage victory. On the initial ramps of the Pordoi there were only five riders left in the final push for success: Christophe Riblon, Austrians Thomas Rohregger (Radioshak) and Georg Preidler (Argos-Shimano), Pole Maciej Paterski (Cannondale) and Czech Zdenek Stybar (Omega Pharma). However in the last three kilometers Riblon left everyone in his dust, flying out on his own towards the finish line at Passo Pordoi. 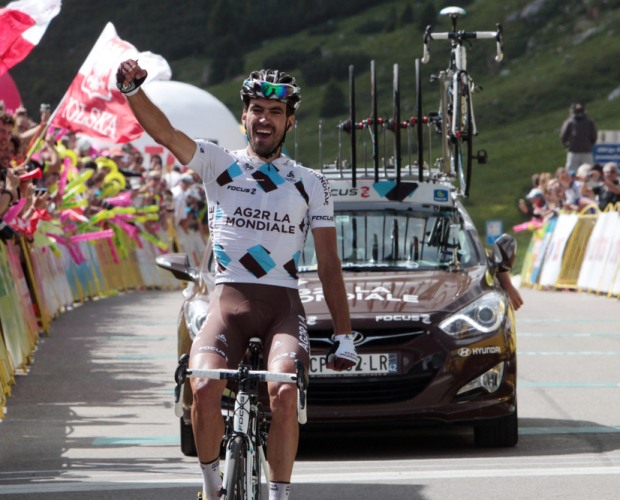 “The stage was very hard and It was a long day. I was always in the lead break,” explains Riblon. “It wasn’t easy. In the final there was a lot of wind and in the last kilometers you could really feel it. Domenico Pozzovivo and I are the leaders of the team here at the Tour de Pologne, we’ll see how it goes in Poland. These two stages were grueling, and they selected the classification a little but in Poland there is still going to be a struggle. For me anyway it was fantastic to win here after the victory at Alpe d’Huez. Two big thrills just a short while apart.”

“I am very happy to have the leader’s jersey and to be the best Pole in the race for now,” says Majka. “It means a lot to me. I like the idea of arriving in Poland with this jersey on my back. It’s important for me and for the team, which worked a lot for me today. I have the yellow jersey but the next days are going to be a battle. Henao is very close in the classification and there are other riders who are a threat. I’m going to do everything I can to defend this prize.”

“Trentino and the Dolomites have given us two extraordinary stages which will always be a part of the history of the Tour de Pologne” says the General Manager of the Tour de Pologne Czeslaw Lang. “We experienced some unique excitement thanks to the scenery we rode through, the warmth of the Italian crowds and especially thanks to the efforts of the riders who honored these first two stages of the race in the best way possible. Ulissi and Riblon scored two splendid stage victories. I’m also happy because I saw Polish riders consistently up front with Majka, who was already among the best yesterday and who managed to clinch the yellow jersey, thereby offering a lovely gift to all of Poland.”

In the other classifications Rohregger clinched the Tauron cyclamen jersey for the GPMs, Bartosz Huzarski (NettApp) who was in the lead break again today is still wearing the red jersey as the most active rider in the group, while the Lang Team white-red jersey for the points’ classification belongs to Majka. 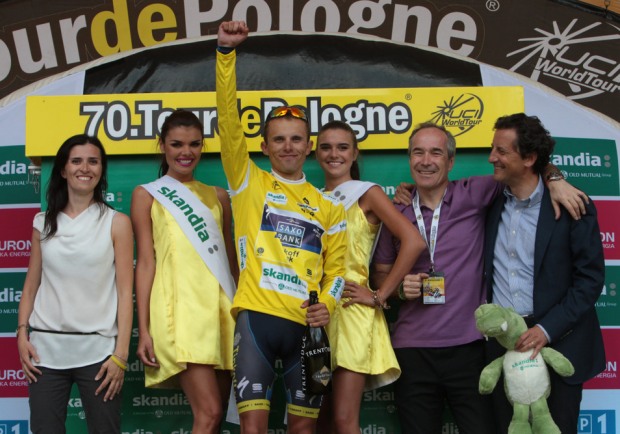