The opening stage of the Tour of Britain ended in an expected bunch finish. Gerald Ciolek led the peloton in the closing metres of the stage after an exceptional leadout from Andreas Stauff. The Milan San-Remo winner came within a whisker of victory only to be passed by Elia Viviani (Cannondale) and Alessandro Petacchi (Omega Pharma-QuickStep).

The result put Ciolek on the podium and third on the general classification at the end of the day, in an excellent start to the British race for Africa’s first Professional Continental team.

“The result could have been better but it was the first stage so we’ll take things day to day,” Ciolek said. “I actually wasn’t feeling good today but then I found my legs for the sprint. Andy was great again. He knows exactly where to ride and how to get to the front so that was a pretty good job. We were so far behind on the last lap because we didn’t know the finish circuit would be so narrow so he did a really good job to get us to the front. There was a bit of confusion in the sprint. Andy didn’t see that I was so far in the front so he didn’t go full in the leadout and Petacchi was leading out for Cavendish but he wasn’t there so I thought maybe this is the moment and I kicked, but I underestimated the head wind.”

The quintet worked well together until the peloton decided it was time to end the attack. As they came within sight of the group, Frenchman Anthony Delaplace (Sojasun) hopped out of the bunch and shot passed the leaders. His solo effort gained him a maximum advantage of just over a minute until the race was all-together for a sprint.

“It was a super sprint from Gerald. I think we can be very happy,” said Sports Director, Jens Zemke. “Unfortunately he went too early as there was wind and it was uphill but we were in the front with the best teams again. Andy Stauff was just great in the leadout, amazing job. We lost Songezo Jim with about ten kilometres to go, then Ferekalsi [Debesay] punctured and Meron [Russom] was caught up in the last crash but we’re happy with the day. We’ll keep an eye on the weather for the next few days but the guys are looking great,” Zemke added. 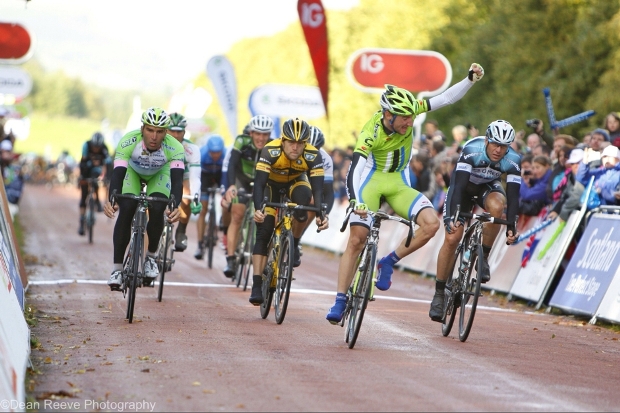 Saxo-Tinkoff have enjoyed a successful Vuelta a Espana