Young African takes over climbers jersey
The 3rd and Queen stage of the Circuit la Sarthe saw a very active MTN-Qhubeka p/b Samsung team with Louis Meintjes and Merhawi Kudus both attacking the peloton during the course of the day. The stage would be taken out by Manuele Boaro (Tinkoff-Saxo) with Pierre Rolland (Europcar) and Jonothan Hivert (Bretagne Seche) in 2nd and 3rd.

Louis would form part of the early break of the day, escaping after just 10km of racing. Our African champ would be joined by 4 other riders for the 190km stage. The final 50km of the stage was where the real challenge lay as 5 laps of a tough 10km circuit was to be tackled. Louis showed good strength to drive the break on, dropping 2 of the escapees on the circuits 8% gradient climb.

With 30km to go Louis and his 2 remaining breakaway mates had 2’30” on the Movistar led peloton. There were a number of attacks at this point from the peloton and Merhawi was represented in each of the moves. Eventually Merhawi went clear in a 4 man move that also contained Rolland. The race would compress dramatically as the peloton held the chasers in close check while Louis lead group would be reeled in with 10km to go.

There were now 8 riders in front, including Merhawi and Louis, with just a single lap to go. The reduced peloton were able to make contact with the leaders at just 2km to go, leaving everything to play for still. Boaro would end up being the strongest and MTN-Qhubeka p/b Samsung had Steve Cummings cross the line in 9th on the stage.

Jens Zemke – Head of Performance
Louis was the in the front of the race all day with 4 riders. With 20km to go Merhawi joined him after riding across with a small group. The 8 riders together got caught with just 2km to go but Louis won all the GPM’s today and takes over the climbers jersey from Jacques. We are happy to keep this jersey in the team. Steve took a top 10 on the stage and has moved up a few places on the GC as well. Our boys are making this race interesting and it’s a pleasure to see them riding full gas. 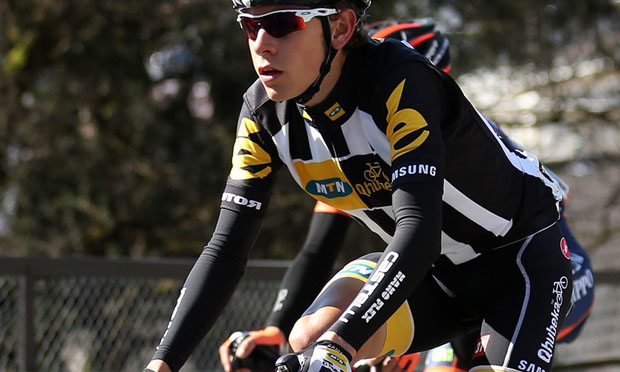