The final stage of the Circuit la Sarthe ended with the expected bunch sprint. There were also no surprises when it was Nacer Bouhanni (Cofidis) who crossed the line first ahead of Aleksei Tsatevich (Katusha) and Samuel Dumoulin (AG2R La Mondiale). The overall victory would go to Ramunas Navardauskas (Cannondale-Garmin) after he won the necessary bonus seconds to leap frog from 3rd to 1st.

With the final stage not being all that selective, Team MTN-Qhubeka p/b Samsung had 2 goals for the day: Louis Meintjes would need to finish safely in the bunch to win the King of the Mountains jersey and Steve Cummings would hope to consolidate his top 10 placing overall. Both objectives were achieved by the MTN-Qhubeka p/b Samsung riders.

Neither of the riders in the early 2 man break, nor the rider who rode across to the leaders later in the stage were of any threat to Louis pink leaders jersey and once the break was caught with 30km to go, no rider behind Stevo on the GC was involved in any of the time bonification sprints.

Team MTN-Qhubeka p/b Samsung can be happy with its performance over the last 4 days. Winning the jersey with Louis and having Stevo finish 6th on GC were credible results for our African team in a race that did not include any big mountains. To have the boy’s race aggressively and play a prominent role on each of the stages was encouraging enough with the Ardennes classics now on the horizon.

Jens Zemke – Head of Performance
Our African team who were guided by Stephen Cummings were very visible throughout the race and we took every chance we could. Steve finished 6th overall on the GC. Every day we were involved in the awards ceremony and Louis won the Best Climbers jersey. Sarthe was a fantastic race for us, competing against only World Tour and Pro-Conti teams. We would also like to thank the supporters here, they really bought a lot of our autograph cards these few days and all this money gets donated to Qhubeka.

The final stage of the Circuit la Sarthe ended with the expected bunch sprint. There were also no surprises when it was Nacer Bouhanni (Cofidis) who crossed the line first ahead of Aleksei Tsatevich (Katusha) and Samuel Dumoulin (AG2R La Mondiale). The overall victory would go to Ramunas Navardauskas (Cannondale-Garmin) after he won the necessary bonus seconds to leap frog from 3rd to 1st. 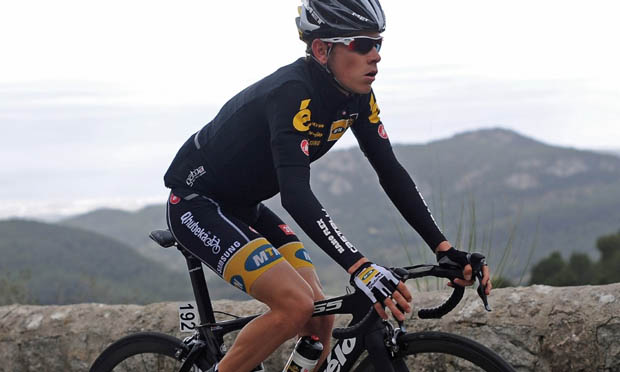 The Sun Will be Shining in Pomarance on Sunday!

Ups and downs for CULT Energy in Circuit Sarthe