Clarke powers to the podium in Sun Tour Prologue

Will Clarke has claimed Drapac Professional Cycling’s first podium of the 2014 Jayco Herald Sun Tour with third place in the twilight 2.5km Prologue through the Melbourne CBD.

The Tasmanian clocked a time of 3:02.51 and played a waiting game in the hot seat as one of the early riders on course, only to be gradually be usurped by New Zealand’s Tom Scully (3:01.08) and finally Jack Bauer (Garmin Sharp) who came into the finish line in a time of 3:00.90.

“I had hoped for a good result here and a top five was what I was aiming for, so third is nice,” Clarke said. “There were some close times – Jack beat me by a second and a half – but he’s a super-powerful rider.

Riders set out from Birrarung Marr, crossing the Yarra River over the Princess Bridge, before doing a loop around the edge of Queen Victoria Gardens and heading to the finish in the heart of Southbank. Clarke believes that the trick to success was to go out hard as early as possible.

“It was quite a technical course so it was a lot about taking risks in the corners tonight and that’s what you had to do to get a good result,” the 28-year-old explained.

“I knew I had the legs for this sort of stuff so to confirm it gives me a lot of encouragement.”

Directeur Sportif Agostino Giramondo said that it was a satisfying performance from the team first up, but Clarke’s ride led to some anxious moments.

“It was very exciting,” he explained. “At some stage there I thought he might actually hold onto the lead.

“Of course, you always want to win but we’re quite happy with the podium and it sets us up for what will hopefully be a good week.”

Giramondo said that while the Prologue’s results “wouldn’t hold sway on the rest of the race” due to the hilly parcours to come, Drapac is ideally placed in second in the Team Classification, 10 seconds in arrears of Garmin Sharp.

“Really, we haven’t got a lot of pressure on us being third at the moment but at the same time, we’re there within striking distance,” he explained. “For us, there’s none better than Will Clarke who has proven that he is a breakaway specialist and things fall the right way for him, having those few seconds up his sleeve could be enough to win the tour. Whether it’s enough for Arthurs Seat on Sunday is yet to be seen but the race could be over before we get there.”

Clarke, who raced aggressively last up at the Santos Tour Down Under to earn three Most Competitive jerseys said he was prepared for anything over the next few days.

“If they want me to save myself or try and bust people up in breakaways we’ll see,” he said. “I always like to suffer out the front for some reason but we’ll see what happens.” 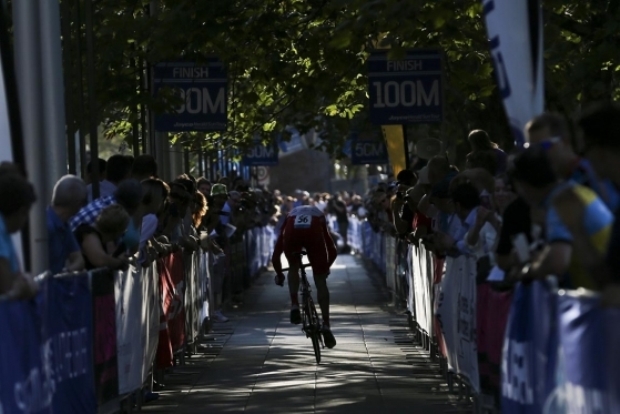 Will Clarke en route to the finish line at Melbourne’s Southbank. © Mark Gunter