Will Clarke has taken honours in the opening stage of the Woodside Tour de Perth on Wednesday night, avoiding a crash just before the finish line. The Tasmanian, who starred for Drapac Professional Cycling earlier in the year at the Santos Tour Down Under, had the legs to finish ahead of CharterMason Giant Racing’s Shannon Johnson and Anthony Giacoppo (Avanti Racing Team).

Clarke, who led the charge for Drapac Professional Cycling throughout the 35-lap event in Fremantle, will now take a four-second lead into Thursday’s second stage to Kalamunda.

It was the perfect return to the National Road Series for Clarke who was overall champion in 2009.

The result was testimony to the team’s aggressive racing throughout the criterium which was run under lights.

“Will and Travis [Meyer] were in every break and in the moves all night,” explained Directeur Sportif Henk Vogels.

“The boys got Will up the front but given he was able to avoid crashing it was just brute strength which saw him take the win ahead of the sprinters of the peloton.”

Clarke admitted that racing was not easy on the tight circuit, despite a significantly reduced field following a crash before the first intermediate sprint.

“The whole race was really sketchy but I was able to come through unscathed and eventually take the win,” he said fresh off the podium and clad in the yellow leader’s jersey.

“I felt pretty good but it was quite a hard race. I was definitely the beneficiary of having four teammates left in the race at the end. They made sure I was up there.”

Lachlan Norris, Jai Crawford, Meyer and Phelan all made the final group of around 70 riders who finished the race – something that Vogels takes confidence from ahead of the next few days.

The 2014 Woodside Tour de Perth continues Thursday with a 116km stage to Kalamunda. 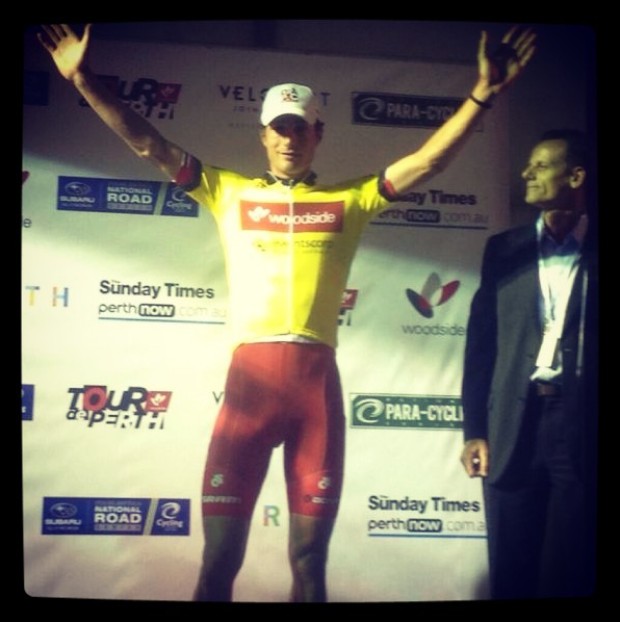