Colombia and Wilier together again in 2015

After officializing six new riders for next season, Team Colombia is glad to announce that the partnership with bike supplier Wilier Triestina will follow in 2015. The established Italian brand based in Rossano Veneto had worked with Claudio Corti’s team in the last two season, and will provide the Escarabajos with the innovative latest version of the Zero.7 frame, already tested by some of Team Colombia’s riders during the 2014 season.

Zero.7 is the lightest racing model ever made by Wilier Triestina, whose frame’s weight stands just below 800 grams, to enhance the performance of climbers like the Colombian Escarabajos. In addition, Wilier Triestina’s engeneers have managed to provide greater riding stability and aerodynamic efficiency by focused their attention and research on the steering area, increasing frame stiffness and reducing drag.

Wilier Triestina’s confirmation is another key stone for 2015 Team Colombia, but not the only one for the day. In fact, in addition to the four athletes already signed for 2015 – Edwin Avila, Jonathan Paredes, Darwin Pantoja and Edward Diaz – General Manager Claudio Corti sealed new deals with five more elements: Colombian National Champion Miguel Angel Rubiano will make the team for the second year in a row, and will be joined by fellow Colombia National Team member in Ponferrada Worlds Carlos Julian Quintero, veteran Leonardo Duque, Rodolfo Torres and Juan Pablo Valencia.

As of today, Team Colombia’s roster features 15 riders, but the work of the technical staff is far from over: a sixteenth rider will be announced in the next few days, while discussions are underway with more athletes, including some already in 2014 roster. 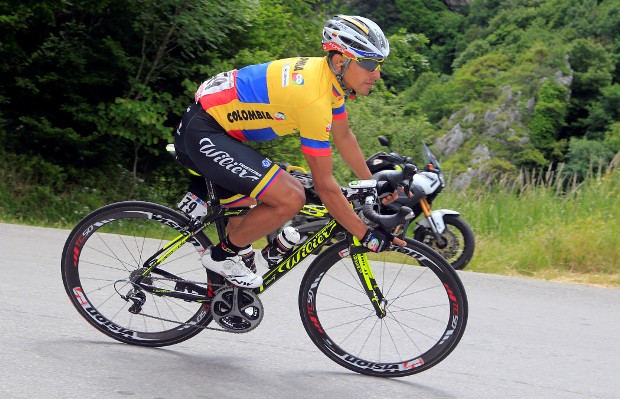