Jim Donaldson, CompuTrainer associate, was one of 25 American triathletes chosen to travel to Cuba to compete in the 2015 La Habana CAMTRI Sprint Triathlon American Cup that was held on Saturday January 24, 2015. This made them the first American athletes to compete on the island since President Kennedy imposed the embargo in the early 60’s. CompuTrainer is the official bike trainer for USA Triathlon and Team USA.

Barry Siff, President of the board of directors of USA Triathlon, and member of the International Triathlon Union board, feels that as an International Relations standpoint, it is a good way to express US support for a developing nation to send a few Americans to the race. With the help of the USOC, USA Triathlon obtained official license to allow a small number of individuals to go to the event. Barry learned of his success on the same day President Obama announced relaxing the Cuban embargo. 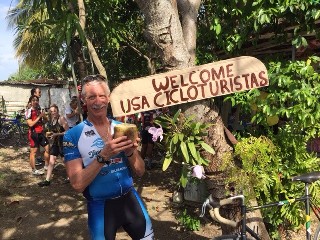 After being selected, Donaldson obtained a travel license from the U.S. Dept. of the Treasury, good for a six-day stay in Cuba. Jim stayed with three other triathletes in a Bed and Breakfast that is in a private home. Jim also rented a bike there rather than transporting his own. “I’m planned to participate in the sprint race– a 700-yard swim, a 13 mile bike, and a 5K run as I am not able to fully train for the longer distance triathlon. Since this is a short race for me, I am comfortable having a rental bike and it will be much easier than bringing my own,” he noted. The Sprint race began and finished at the Marina Hemmingway, a beautiful harbor, with Turquoise blue water, very calm, and then riding the bike for four laps in and out of the Mariana Hemingway area, as well as running there. The finish for the Sprint was at the Marina also. The greatest challenge on race day was the “driving rain”! A tremendous thunderstorm rolled in across the sea, and the rain begin as our race started. Temperatures dropped, and for a tropical island, it actually became quite chilly!! 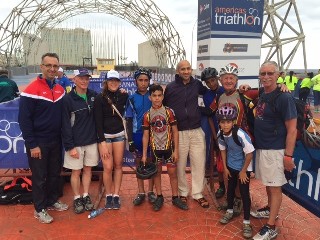 The finish for the longer distance races, held on Sunday January 25, was at a Historical Plaza, called the Anti-Imperialist Plaza, built by Castro 50 years ago. It is where the United States Embassy was 50 years ago. It is a huge building, and will most likely house the American Embassy again, when Diplomatic relations are again established. 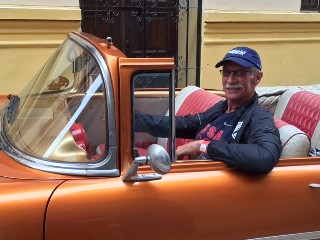 There were some challenges getting there. “Since Americans have not been able to travel direct to Cuba for the past 50 years, Jim went to Cuba from Cancun. “I go to Cancun, Mexico and then take another plane to Cuba: Cubana Airlines. I cannot exchange money until I arrive, as I will need Cuban Pesos called “CUKES” CUC. There were no American services: cannot use American credit cards, or US cell phones. Language was a barrier,” he noted. For instance, trying to get a Taxi, took about an hour, just to communicate to people what we wanted…a taxi ride. Very few people on the streets spoke any English. The Cubans are a very happy people, fun loving, caring and generous!! They are very resourceful, and I wanted to bring back a 1957 Chevy, however, only the body was a Chevy, over the years, they have had to make repairs with Mercedes parts, Kia, and Russian made parts! 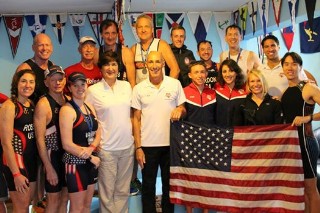 An American Elite woman, Renee Tomlin won the Sprint race for Professionals, and Rodrigo Gonzalez from Mexico won for the Men. It was very moving, and quite a historical moment, for all of us there to hear our NATIONAL ANTHEM being played, as our AMERICAN FLAG was raised in her honor.

I must tell you about a HIGHLIGHT of the trip. Peter Marshall, and his wife Ana, assisted us with our bike rentals. I was writing him almost every day prior to arrival, asking questions, and he made a special occasion for all of us.

On Friday, before the race, Peter had arranged for a group of young cyclists to take us to their village and enjoy the day riding, and having what Peter called “a light offering of food” when we arrived. The villages is Punta Brava, and it belongs to Lisa municipality, this is the last village that belongs to La Habana province. Old Nico is the coach of the club, he is a Granddad of one of the kids, in his late 70’s and an avid cyclist. He led the ride back to the Marina Hemingway.

Peter works with these Jr and High school aged kids, and he had asked us to bring any old items that he could give to them. They are in desperate need of “rubber”: tires, tubes anything to repair the bikes, headsets, handlebars etc. We all brought kids something, as I put the word out to the group, as I became the lead on this adventure.

The “light offering of food’ was an absolute FEAST!! The kids and people there were so gracious, and the table was full of wonderful things to eat.

It was a wonderful experience, and we all bonded, all from different parts of the US, and different ages, but camaraderie was instant, and it will be long lasting.

Unfortunately, a good number of us fell ill on the way home, and are now in recovery phase from a head and chest cold, possibly due to late nights and the driving rain and cool temperatures.

Buy a CompuTrainer now and also receive the “Escape-from-Alcatraz” Interactive Real Course Video FREE. And don’t forget to ask about our 12 Month 0% Financing.