Tinkoff’s GC leader, Alberto Contador fittingly leads the team at its final race of the season, its final race as Tinkoff, the four-day Abu Dhabi Tour. Comprising of four road stages – three flat, sprinters’ tests and one mountain-top finish – the race offers different opportunities for late season results, and Tinkoff heads into the event with a roster able to compete across both types of parcours.

“I will approach this race in a different way. Initially, it didn’t form part of my racing schedule and it came as a last-minute addition,” explained Alberto ahead of the race. “We will give our best and I think Jesper Hansen can have a good race. I will personally take one day at a time. There might be days where the breeze will be an important factor but we will stay calm. I will try to enjoy it since it’s the first time I race here. There is no doubt the heat will play a big role in our performance – some riders adapt better while other might struggle. However, the heat is the same for everybody and staying hydrated will be key although I don’t think we are facing extreme temperatures.” 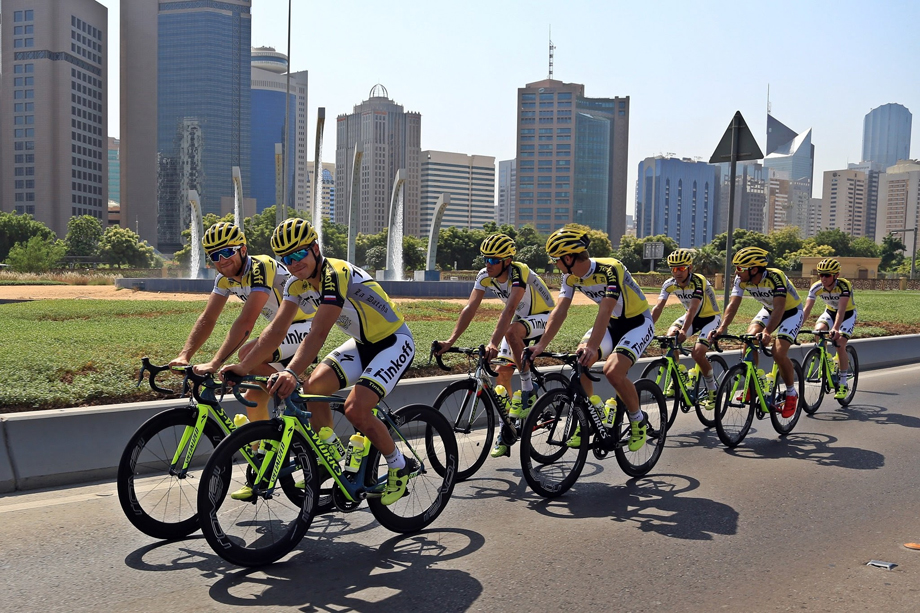 The team will race with a special kit that is inspired by the very first colours of Tinkoff Credit Systems, from exactly 10 years ago.

Alongside Alberto will be Jesper Hansen, able to lead the GC fight if Alberto finds himself not fully recovered from late season illness. In support for the flats and mountain stage, these two have Jesús Hernández. For the sprint opportunities, the team will look towards Erik Baška, heading to Abu Dhabi from the U23 World Road Race Championships, as well as Michael Kolar, who also competed in Doha, helping Peter Sagan to victory in the elite race. The team is then completed by Juraj Sagan, able to support the two sprinters or even take his chances to get up the road where appropriate.

Looking at the roster for the race, Sport Director, Tristan Hoffman told us: “We will have to see a bit how Alberto has recovered because he is coming back from sickness recently, but he will be our leader here. If he is not feeling good, then Jesper will also be a good option for the GC. Erik, Michael and Juraj are all coming here from the Worlds and have been training well for that so hopefully they will have some good form. We’ve got two sprinters in Erik and Michael, so we will be fluid out on the road and see who’s feeling better each day.

“There’s not usually too much wind here in Abu Dhabi and I don’t expect big splits like we see in Qatar, so I think that we’ll have three big sprint days and then the GC will be decided on stage 3’s uphill finish. The final day is quite special, based on the Formula 1 circuit, and it’s really impressive to see the whole set up there and to race around it. It’s a nice way to finish off the season.” 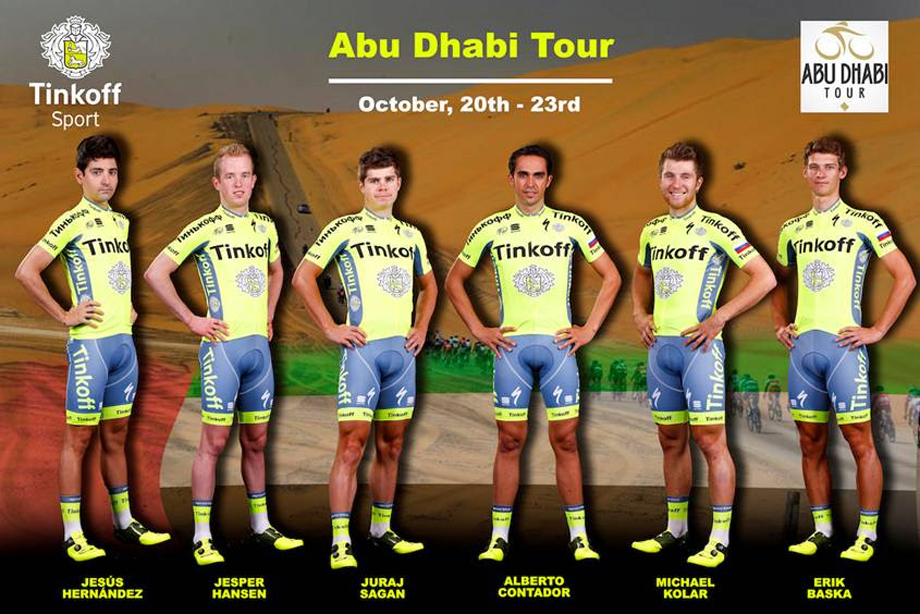 Stage 1
The race gets underway with a near pan-flat sprint stage, starting and finishing in Medinat Zayed, covering a relatively short 147km. Based on a straight forward out and back loop, the race is most likely to come down to a bunch sprint, the first of three opportunities for the fast men to shine. However, if the wind is blowing, then it could be a long day for the peloton with the potential of much of the stage being battled out in crosswinds. 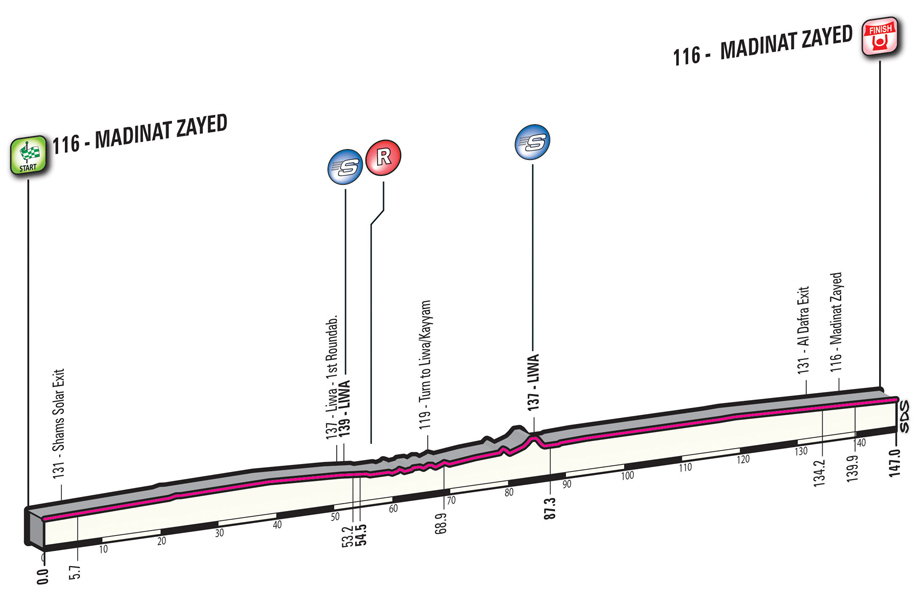 Stage 2
Another flat stage follows on Friday where the race will cover a costal loop that finishes near the famous Corniche. The only opportunity to see the final kilometres will be that of the real finish, so the sprinters will need to be ready to battle it out once again before a day for the climbers on Saturday.

Stage 3
The Queen stage of the race, stage 3 takes the riders 150km from Al Ain to Jebel Hafeet, before finishing atop the final climb to the line at over 1025m altitude. The climb comes after a flat run to its base, where we can expect to see an early breakaway forming that tries to amass as much of an advantage as possible before the GC favourites kick into action behind when the gradients ramp up. This stage should be where the overall classification is decided. 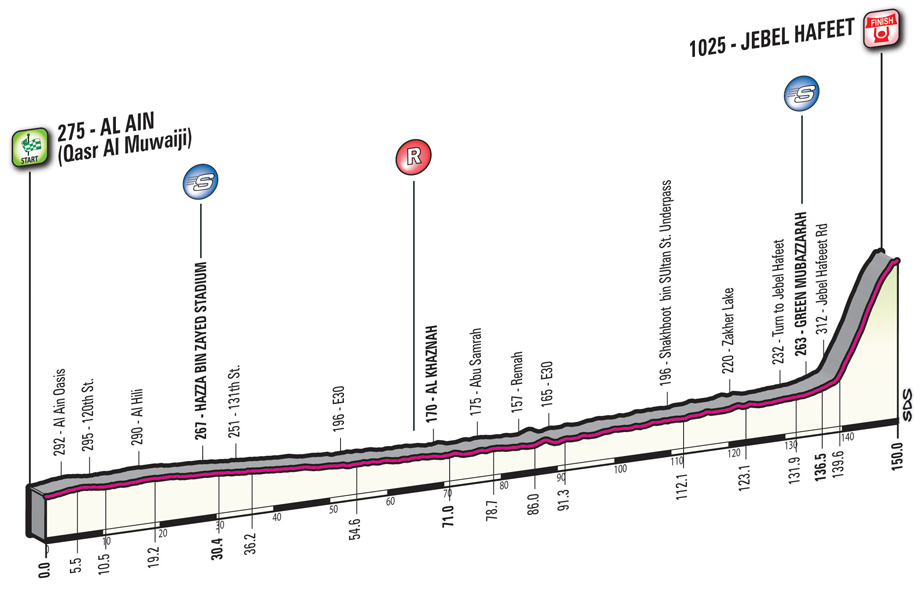 Stage 4
The fourth and final stage of the Abu Dhabi Tour takes the peloton around 26 laps of the 5.5km Yas Marina Circuit, usually home to the blistering speeds of Formula 1 cars. Next Sunday, however, it will be a show of human-powered speed as some of the world’s fastest sprinters will do battle to decide who will win the final stage of the race.

The Most Beautiful Cycle Routes In Europe