Contador: The next four days will be really hard

Tinkoff-Saxo and Alberto Contador got safely through today’s stage and avoided the crash that occurred as the riders passed the final kilometer mark. Alberto crossed the finish line in front of his rivals, although that did not have much significance, since the time was neutralized.

“There was a crash in the final kilometer but we avoided it and that’s what’s important. One more day done and the team performed well. Now I have to rest, because the next four days will be very tough and important”, says Alberto Contador after crossing the finish line.

As expected, the time was neutralized at the finish line due to the crash. And for Tinkoff-Saxo’s Spanish captain, the most important was to ride in the front of the peloton to stay safe.

“During the stage and in the fast finale, I was in the front of the peloton. My team pulled really hard and I was very well placed at all times”, Contador said.

Tomorrow will present the riders of this year’s Vuelta a España with a more undulating stage and a relatively dangerous finish.

“We have some key stages ahead of us and tomorrow will be a day, where we have to be concentrated and alert – especially in the final part. I think tomorrow will be a busy day and we must be attentive right until the end”, concludes Alberto Contador. 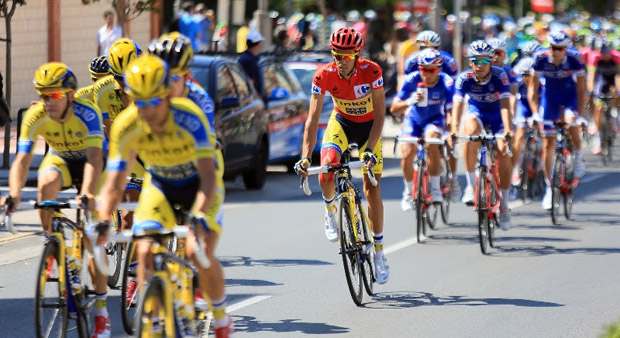