Conti, Bonifazio and Cambianica for the second part of 2013

Valerio Conti, born in 1993, drew the attention of Saronni’s team in the past season and now he’s ready to taste the pro world making his debut in LAMPRE-MERIDA in Memorial Pantani. He’ll become pro rider in 2014 in LAMPRE-MERIDA.
Conti is a fast climber who manages very well his energies during the races. He obtained many victories in juniors category and 4 successes in Under 23 (Gp Industria e Commercio Stabbiese, Trofeo Alessio Pistolesi, Roero Grimpeur and cronosquadre del Giro delle Valli Cuneesi).
In this season, Conti is member of Mastromarco Sensi Doveri Benedetti roster.

In LAMPRE-MERIDA’s radar for a long time, Niccolò Bonifazio will have his chance to be tested ad trainee.
As foretaste of next season passage in pro world in Saronni’s team, he’s going to take part in Coppa Bernocchi, Parigi-Bruxelles, Gp Fourmies and Gp Costa degli Etruschi.
He was born in Cuneo 1993, he’s a quick rouleur and he obtained 6 victories in 2013, in addition to the 7 races he had won in 2012.
He came back recently to races, obtaining the 2nd place in Circuito di Castelnoceto, after that he suffered a broken collarbone in European track championship.

Enea Cambianica, born in Bellinzona (Switzerland), will be the foreigner trainee for LAMPRE-MERIDA.
Twenty-three years old, 177 cm and 64 kg he’s a climber that could be competitive on flat roads too.
Even if he has not yet got to a victory, the Swiss athlete obtained the 3rd place in Bouillante stage in Tour de la Gadeloupe 2012, the 7th place in the final classification of Tour de la Guadeloupe and the 6th place in Tour d’Auvergne.
He lived 2013 season in Team Maca Loca-Scott and, wearing LAMPRE-MERIDA’s jersey, he’ll take part in Coppa Bernocchi and Tre Valli Varesine. 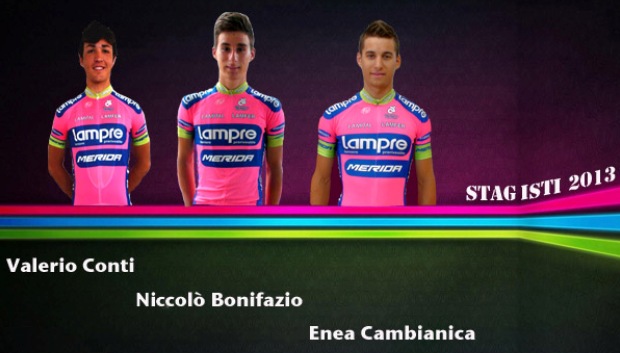