Louis Meintjes positioned well on GC
As he has multiple times this year already, Johann van Zyl made sure Team MTN-Qhubeka p/b Samsung were represented in the breakaway during the 3rd Coppi Bartali stage. The stage would end in a mass sprint though with Francesco Chicci (Androni-Giocattoli) reigning victorious.

There were a total of 11 riders in the main escape of the day, joining Johann was countryman Dylan Girdlestone (Drapac) in the move to make it 2 riders from Africa out in the lead. The peloton allowed the attackers to gain a maximum advantage of 3 minutes before Bardiani and Team Sky began the calculated chase.

With a fast and flat run in to the line the sprinters were always going to fancy the finish today. With 15km to go it was only Johann, Girdlestone and Giorgio Cecchinel (Southeast) remaining at the head of the race with a 20″ lead. Their advantage was soon wiped away and Chicci romped to victory ahead of Manuel Belletti (Southeast) and Daniele Colli (Nippo-Vini Fantini).

Louis Meintjes finished safely in the main bunch to hold on to his 6th position overall ahead of tomorrow’s deciding final stage. With 10 riders all within of a minute of a podium placing, an attacking day of racing is expected.

Johann van Zyl – Rider
Today was quite a gamble with regard to going in the break or not. I was hoping if the right combination of riders got a gap then we could make it stick and eventually we were a group of 11. We had to ride pretty hard all day as Bardiani wanted to sprint. Eventually 3 of us attacked the break with 2 laps to go to see if we could make it, obviously we didn’t. One day my break will stick. 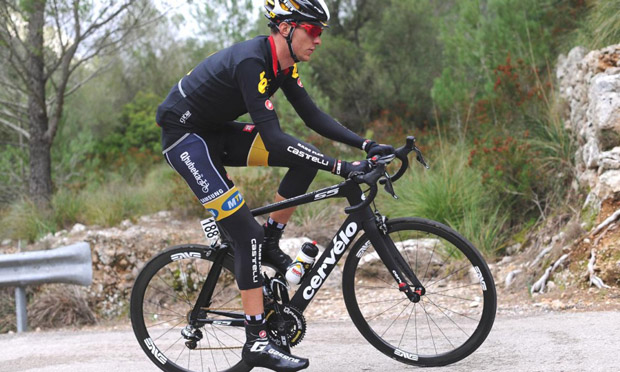 Gerdemann one minute down before crucial queen stage