Corti and Duarte discover 2014 Giro: “A route for climbers”

2014 Giro d’Italia was unveiled on Monday October 7th, at the Ice Palace in Milan, with the attendance of management and athletes of all the most important teams in the World. After Team Colombia’s historical debut at the Corsa Rosa in 2013, General Manager Claudio Corti, Sports Director Valerio Tebaldi and Fabio Duarte took the chance to give a first-hand look to the route of the first grand tour of the upcoming season, as the team hopes to get one of the four wild cards to be granted by organizer RCS Sport.

The 97th Giro d’Italia will start in Belfast, Northern Irland, on Friday May 9th, 2014, and finish on Sunday June 1st, 2014 after 3.449 km. In between, three time trials (including one for teams), three rest days and eight uphill finishes. As usual, big mountains are set to decide the Corsa Rosa’s final outcome, and the feared Monte Zoncolan, with 11% average gradients and peaks up to 22%, will make its return to the race on the penultimate day.

The Giro will provide a number of opportunities for strong climbers, as Team Colombia’s General Manager Claudio Corti stated: “It will be a demanding race, similar to 2013 to some extent, and we hope the weather will give us the chance to enjoy the show such great mountains are able to provide. Personally, I am glad the Val Martello stage (16th) will be back, after being cancelled in 2013 due to snow: it’s a high-altitude stage, featuring both Gavia and Stelvio, and definitely one suited to the Colombian athletes’ qualities.”

Corti pointed two more stages that could prove crucial to the final GC outcome: “The Plan of Montecampione (stage 15) was decisive several times at the Giro, and I think it might prove key this time too. In addition, the uphill time trial to Monte Grappa (stage 19) will be another important test, way more demanding than the one we faced in 2013, and suited for pure climbers.”

“A 46 km time trial at stage 12 could mislead, but anyone who wants to win the Giro will need great climbing legs, in first place. And I hope we will see another Colombian rider step on the final podium,” Corti concluded.

The 97th Giro’s route also impressed Fabio Duarte, a great protagonist of the final week of the race in 2013, culminating with a brilliant runner-up spot in Tre Cime di Lavaredo snowstorm: “I am happy to be at the presentation of this race I love, and I am looking at it with great ambitions. This year, I managed to find my best condition in the final week only, but in 2014 I am looking to work to be ready for the start, and possibly compete for the GC. I hope RCS Sport will entrust us once again, after we did well to reward their confidence in 2013 Giro.” 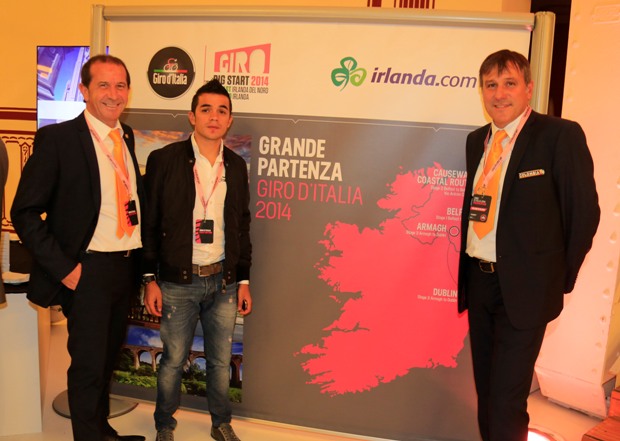 Toolbox: The Sands of Time