From Malè (the city of astronaut Samantha Cristoforetti) to Cles, the route of the Giro del Trentino’s last stage goes on the roads of the last National Championships won by Vincenzo Nibali, and pays a tribute to Marco Brentari.

The parcours of the 39th Giro del Trentino Melinda (21-24 April) is quasi-complete and we can talk of a “cosmic” conclusion. The GS Alto Garda organizers have unveiled the last stage of the race, which will start from Malè, the municipality where Samantha Cristoforetti grew up, and from where she went on to become an astronaut and a big celebrity on the social media, known by the nickname Astrosamantha. Living on the International Space Station for three months, she is the first Italian woman in space and often she shows the beauty of the Earth from a very unique perspective. Some of these special places will accompany the riders during the 170 kilometers of the stage that finishes in Cles.

After the Riva del Garda-Arco team time trial and the Arco-Brentonico queen-stage, with the tough ascent to Monte Velo, the epilogue of this race loved so much by the riders and the fans will take place on the roads of Val di Non and Val di Sole. By doing this, the organizers wanted to pay a tribute to the historical patron of the Trofeo Melinda – Marco Brentari, who passed away one year ago, in March – and also celebrate in style the recent agreement between the Giro del Trentino and the Melinda Consortium, which now gives the new name of the race.

The fourth stage comes with a technical and spectacular course, starting from Malè, in Val di Sole, and quickly heading towards Val di Non. In Romeno, 47 km after the start, there is an intermediate sprint, and afterwards the cyclists will hit the two climbs of the day, both of second category. The first one will come at Fondo (997 m high), while the second – Passo Predaia (1250 m high) – will be tackled at km 101. Then, a long descent will take the bunch on the final circuit, which the riders will have to cover twice. The blossomed apple trees will provide quite a beautiful background in the region of the famous Melinda brand. The peloton will pass through Cles, Tuenno, Nanno and Tassullo, and will continue with the uphill finish to Cles, a nervous last part that doesn’t let the riders recover and leaves everything open for the race’s finale. The big fight for the overall classification means that the riders have to be focused all the time.

To understand the high-quality level of the Giro del Trentino Melinda 2015 epilogue is enough to look at the names of the riders who fought on these roads in the past. At the beginning, the history of the “Circuito degli Assi” was written by legends like Francesco Moser, Gian Battista Baronchelli, Laurent Fignon, and the local idol, Maurizio Fondriest. The story continued once the race had its slot on the international calendar and went on to become Trofeo Melinda, with such champions as Michele Bartoli, Damiano Cunego, Giovanni Visconti and Vincenzo Nibali, who had won it twice. The most recent victory came last year and thanks to it Nibali received the National Champion Jersey, which he got to wear during his triumphal ride in France, where he finished as the Tour de France Champion.

The course of the Giro del Trentino Melinda is the best guarantee to watch a hard fought, difficult to predict and spectacular race. Now it’s up to the cyclists to rise to the expectations. 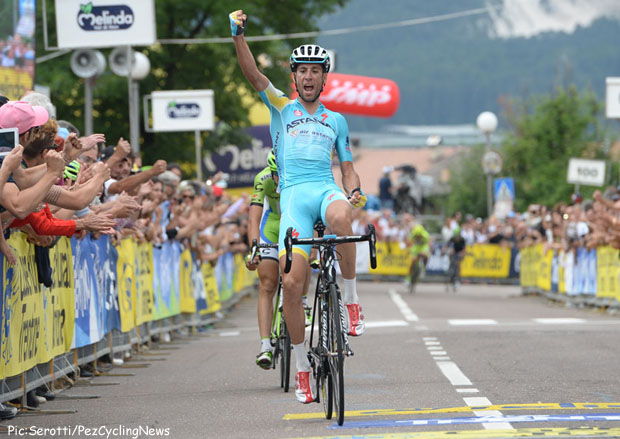 10 weeks until the GF Gimondi

Paris-Nice 2015: Jean-Christophe Péraud “Nothing to Lose”