The final stage of the Tour de Suisse saw a shake up in the General Classification as Tony Martin (Omega Pharma Quickstep) finally lost his grip on the yellow leaders jersey. World Road Race Champion, Rui Costa (Lampre Merida), would walk away as overall victor of the Tour de Suisse for the 3rd year in succession. Mathias Frank (IAM Cycling) was 2nd overall in his home tour with Tour de France contender Bauke Mollema (Belkin) rounding out the podium.

Costa, Mollema and Frank took the racing to Martin on the final stage by attacking the yellow jersey with 40km’s still to race. Martin had already been isolated since 20km’s earlier and had to do the majority of the pacing by himself already. Mollema and Frank though had placed team mates in the final stages early break and once the attackers had bridged to their team mates, IAM Cycling and Belkin drove the gap up to 2 and a half minutes over the yellow jersey group, while Costa sat on in the lead group along with a handful of riders from the original break.

With Tom Dumoulin (Giant Shimano) and Sergio Pardilla (MTN-Qhubeka) having missed the move at 40km’s to go, it was up to the two young talents, Warren Barguil (Giant Shimano) and Louis Meintjes (MTN-Qhubeka) to assist Martin with the chase. They were able to reduce the gap to 1’40″ with 8km of climbing still to go before pulling off. The gap was just too much to close though and with 4km’s to go, Frank put in a big attack that only Costa and Mollema could follow from the lead group. The race was all but done from here on with just the final stage placings to be decided now.

Pardilla and Roman Kreuziger (Tinkoff Saxo) would continue to attack the yellow jersey group in the hope of improving their GC placings but they would all pretty much stay together right up to the line. Costa took the stage win, Mollema was 2nd across the line followed closely by Frank. Pardilla would eventually sprint across the line in 13th, just over 2 minutes down on the trio.

Rider – Louis Meintjes
It was a super hard day right from the start. I was feeling good but i could see Sergio was having a really good day, so in the last few km’s before the final climb i did a bit of work to try get the gap down so that he could go for a result on the stage.

Rider – Sergio Pardilla
Today was a really hard day, in fact the whole week has been a hard week of racing. The goal was to finish in the top 10 of the GC but this was not possible today. The team really did a great job but i am not happy with my result. I am really disappointed and upset right now.

Directeur Sportif – Jens Zemke
Our team had 2 riders fighting for a respectable GC spot here at the Tour de Suisse, we were also very visible in the breakaways. We missed some results in the sprint finishes. We were again unlucky to lose Jacques and Daniel in crashes and Gerald had to stop after getting sick. In all though it was a great experience for us to compete with the big Tour de France guys and the media interest in our team was huge. We thank the organisation for a great event and we hope to join the Tour de Suisse next year again.

Team Principal – Douglas Ryder
The Tour de Suisse was a great success for the team. We were hoping to get a top 10 on the General Classification and to finish 12th was pretty good. We were also hoping to win a stage but Gerald wasn’t well all week and neither was Linus actually so that wasn’t great in terms of their health. Jacques crashed out on the second day and Daniel also on the 2nd last day and both of those riders would really have been in need the last two days, so in terms of our General Classification calculations it was still pretty good to end up with the position that we did.

With the racing at such a high level here the team performance was brilliant actually. Louis Meintjes attacking on the Verbier climb and Sergio doing so well on GC was all very good. Unfortunately Sergio missed the big split right at the end but it resulted in Louis having to chase down the World Champion, all these factors made it a very good performance by the team in the end. 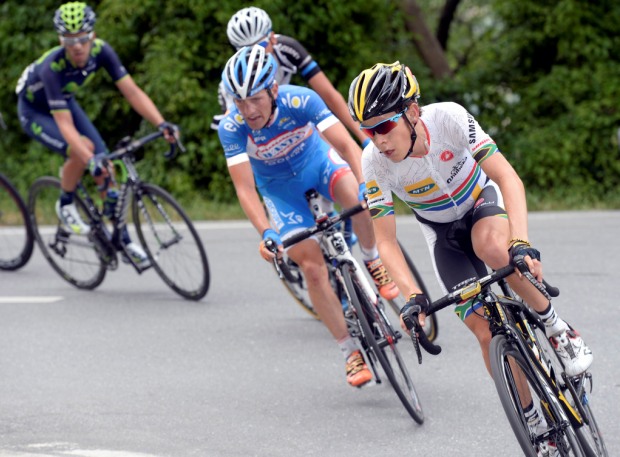