Crawford collects second win for Drapac at Tour of Tasmania

Jai Crawford made it two victories in two days for Drapac Professional Cycling at the 2014 Tour of Tasmania on Thursday, surging on the final climb of Stage 3 to take the win in a time of 2:21:34.

Thirty-one-year-old Crawford’s victory follows hot on the heels of that by fellow Tasmanian Wes Sulzberger on Wednesday’s second stage. It was another case of the breakaway collecting the spoils with Crawford on the attack all day.

“It’s fantastic,” said Crawford following his win. “It’s probably my final bike race so to win a stage at my home tour is a dream really. I’ve had bigger wins around the world but my family’s really excited and they will come up and watch the final stage in Devonport.”

Speaking of the Tasmanian dominance of the last two days, Crawford said: “It’s a tough tour but Tasmanian’s are tough guys so that’s why we do well here.”

Crawford, a Hobart-native, took a six-second advantage over Patrick Bevin (Search2Retain) to the finish line in Grindelwald after 93km, with Michael Jaeger (Peloton Sports/Turramurra Cyclery Racing) third on the same time. Drapac teammates and both former overall winners of the Tour of Tasmania, Lachlan Norris and Bernard Sulzberger featured in the top-10 at the finish, crossing the line in eighth and ninth place respectively.

“I knew it was a tough final climb, I’d talked to the guys about it and I knew it was a good one for me,” Crawford explained. “The guys I was with in the breakaway were strong and they were going well but they were all bigger guys so I was backing myself to out-climb them up there as long as we had enough of a gap. You hit that final climb with a bit of fatigue after being off the front for so long.

“I still had good legs and managed to get away and hold them off,” he continued. “It was still quite difficult after the KOM unfortunately. I was hoping it was going to drop down with a bit of a decent to the finish but it never really came.”

In the General Classification, Stage 1 winner Ben Dyball (Avanti) remains overall leader at 6:09:15 with Norris still in fourth place, 55seconds back. Wes Sulzberger also features in the top-10 on GC, in sixth 1:08 in arrears of Dyball.

“It’s a fantastic effort from the boys to get the win again,” said Drapac Directeur Sportif, Henk Vogels. “Jai showed his class in the last 6km to hit them at the bottom of the climb and hold them off which was pretty impressive seeing as the bunch was breathing down their neck. For him to hold on after being away all day was an impressive ride.”

Attacks came thick and fast from the peloton as soon as the flag dropped on Stage 3, with the first KOM at the 18.9km mark. Crawford and Nathan Eliott (African Wildlife Safaris) escaped off the front of the bunch, but were reeled in quickly. The graduated climb saw a split of 20 riders in the front with a gap of around 50seconds at one point, before coming back together.

Josh Aldridge and Jaeger attacked the peloton following the first sprint of the day at 27.2km, with Morgan Smith (Charter Mason) and Crawford chasing the move.

“Initially joining the breakaway today I was really thinking about putting pressure on Avanti just for Lachie and Wes’ benefit,” said Crawford.

With 40kms gone, the four riders had 1:15 on the peloton with Budget Forklifts, Search2Retain and Avatni leading the chase. The gap would reach a maximum advantage of two-and-a-half-minutes with 30km to go and the final climb at Grindelwald looming.

On the ascent, it was only Jaeger that could follow Crawford.

“Fortunately he was willing to work,” Crawford explained. “On the final kilometre and a half of the climb I was able to get rid of him and then ride the final 3km to the finish.

“I did look back once when I initially went and I could see the peloton was there,” he continued. “I knew that it would be close but I still had good legs. It was a tough climb so I always believed my chances were good.”

The 2014 Tour of Tasmania continues on Friday with the 106km Ulverstone to Penguin Road Race which last year was won by Drapac’s Bernard Sulzberger. 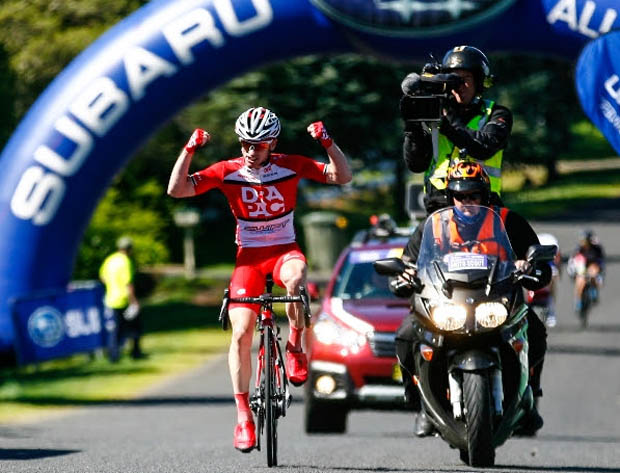