Kwiatkowski moves into 3rd in the GC, as Dennis takes over the yellow jersey.

This is the 34th win for OPQS (32 road), in three disciplines, in 2013. Martin has also won every ITT he has participated in this season, except for a prologue. He has eight total wins in 2013.

“I was really looking forward to today,” Martin said. “It was the first long time trial after Volta ao Algarve. It was a really nice form test for the Tour. In the past days I had some stomach problems due to a virus. The biggest problem I had was two days ago, and yesterday I was already feeling better. not 100 percent but when I woke up this morning I was pretty OK, feeling optimistic and feeling confident. So, I’m not 100 percent recovered, but almost. I’m happy with the stage win.”

Martin said it was a good feeling as preparation for the Tour de France.

“We have two ITTs at the Tour, but also at the beginning a team time trial,” Martin said. “So, it’s really important for me and the team as it is also a good chance to fight for the yellow jersey. We also have one of the best sprinters with Cav, so I think we will have a lot of opportunities. As for me, I was happy about my gap to a rider such as Froome today. I’m not 100% fit, so I’m happy with my result. It’s a nice moment right now, but I have to be realistic. The first ITT at the Tour fits me, but the second one for sure is pretty hard. I go to see it after the Dauphine and then I can make my opinion.”

As for the next days at Dauphine, Martin will now focus on helping his teammates.

“In the next days I will try to be useful for the team on the mountains,” Martin said. “I have to improve a bit on the climbs before the Tour and the last days of the Dauphine are perfect for it.”

Kwiatkowski, now 3rd in the GC, said he is happy about his top 5 result at the Dauphine ITT.

“I think I went much faster in the first part than the second part because I usually catch Capecchi and Santaromita,” Kwiatkowski said. “That was my goal, to see where they are. In the middle of the TT I caught them. The second part I maybe lost some time, but finally with 5km to go I gave it all. I am happy about my race. I trained a lot actually before this race for the time trial, and I had a good feeling. The result is not important now. Because, the first race after such a long period without racing, makes me happy about such a good feeling about my position and everything, and also having no problems during the course. The 3rd position in the GC is a good result so far, but now we will go into the mountains and the GC will probably change. We will see day by day.” 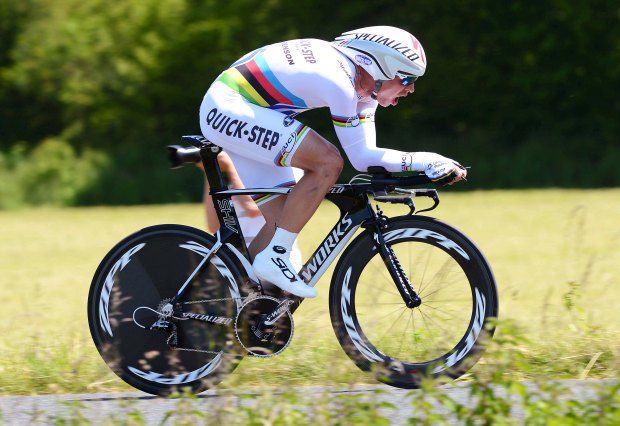 Mollema looking for a good classification in the Tour de Suisse

RadioShack Leopard line-ups for the next races