CycleOps, a leader in indoor bike trainers, is excited to announce the winners of the #MyCycleOpsStudio photo contest. Jerry from Northport, New York, has been awarded the grand prize. Which includes a new TV, a Bluetooth Smart PowerSync trainer, a lifetime subscription to CycleOps VirtualTraining, a set of PowerTap wheels, a Saris Hottie home storage unit and more.

When notified with this news, Jerry said, “I am super excited to be selected as the Grand Prize Winner. My goals of completing my first century ride and losing 40 pounds are within my grasp now more than ever. I am committed, I am motivated and CycleOps has given me the tools necessary to achieve them.” Both the second and third place winners, Sandra and David respectively, were also elated to have won their prize packages – both of which feature a brand new CycleOps bike trainer and a subscription to CycleOps VirtualTraining. Additionally, CycleOps would also like to thank their partners, such as Cannondale and ENVE, for helping make the contest a success. 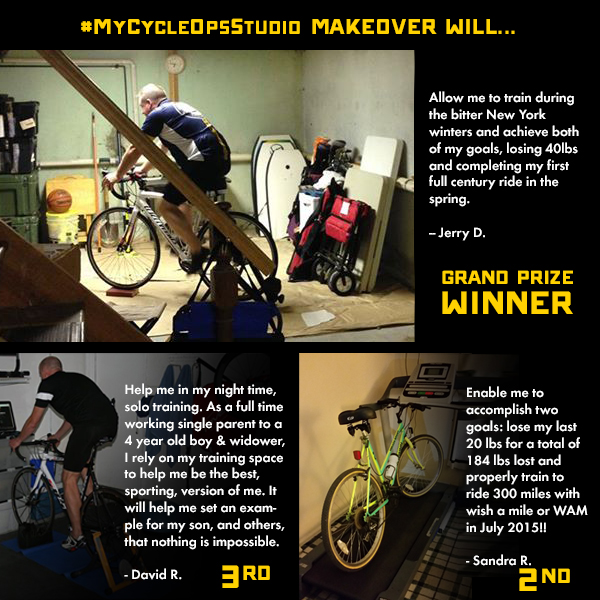 WHAT: Inspired by the goals of their consumers, CycleOps launched the #MyCycleOpsStudio photo contest. They asked participants to share a photo of their indoor training space and fill in the blank “#MyCycleOpsStudio makeover will:___”. Hundreds of photos were sent in from over 20 countries, each with a goal worthy of the grand prize package.

WHEN: The #MyCycleOpsStudio photo contest ran from October 15th – November 14th.
ABOUT CYCLEOPS: Performance-driven products, innovative technology, and a commitment to our customers has made CycleOps a leading name in the indoor cycling industry. For any goal-oriented cyclist, CycleOps eliminates barriers to success by bringing your ride inside. Find out more about CycleOps at www.cycleops.com