TUCSON, AZ – Cycligent Physical Esports is awarding a total of over $100,000 in combined cash and prizes over their Winter 2018 season.  A large portion will be awarded to cyclists at their upcoming CVR World Cup virtual cycling race in Los Angeles on March 25th.  The Winter 2018 cash prize pool grows through crowdfunding right up to race day, it already far exceeds the $44,000 paid out in their Fall 2017 major event in Paris, France.  This is a testament to the growing interest in their new virtual cycling esport and the power of crowdfunding. 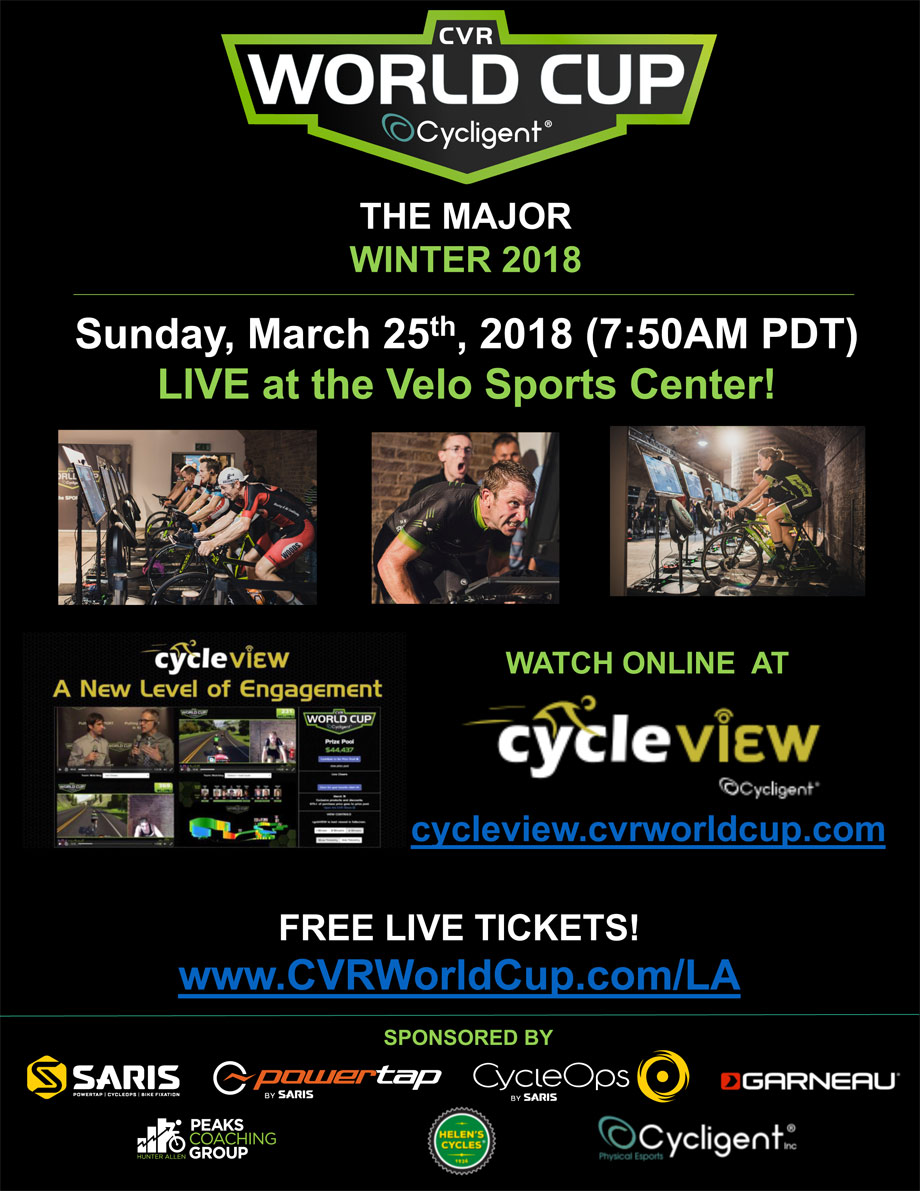 In one year, Cycligent Physical Esports, owner of the CVR World Cup, has taken virtual cycling into the mainstream.  Elite and amateur cyclists worldwide have taken notice, and train for months for a chance to qualify and get invited to race at the CVR World Cup, where they can win substantial prize purses, with equal prizes going to men and women.

What started out as a few virtual cyclists coming together to compete against each other as a hobby, has grown into an international brand, offering LIVE major races worldwide, as well as their own training program and league.  The CVR World Cup League consists of cyclists that compete against each other every Tuesday online, in every major time zone, from their home or office, via Zwift’s worldwide multi-user technology.  CVR World Cup League is located at https://cvrworldcup.com/cvr-league.

Cycligent Physical Esports CEO Frank Garcia said, “A unique aspect of watching the CVR World Cup League, is that you not only watch avatars, but you also get to view people streaming themselves live, in real-time, as they race.  You see suffering, you see elation, and you connect with it.”

3-4 times a year, CVR World Cup holds and streams large-scale, live events, where cyclists compete virtually, but all from the same location, currently using the same type of calibrated equipment provided by major sponsors Saris, CycleOps, and PowerTap.  Previous CVR World Cup races were held in Las Vegas, London and Paris.  The next live CVR World Cup race is being held on March 24th and March 25th at the Velo Sports Center in Carson. CA.  Free tickets are available at https://cvrworldcup.com/LA.  The entire race will we streamed online via their cycleVIEW™ online application located at https://cycleview.cvrworldcup.com.

CVR World Cup is cycling esports on a global scale with large prize purses.  Cycligent is the pioneer of Physical Esports™, the fusion of digital gaming and physical activity for broadcast around the globe. Their website is located at https://www.cvrworldcup.com    To showcase Physical Esports™, they began the CVR World Cup, where you can watch cyclists compete each week in a virtual environment called cycleVIEW™.