The director of Tour de Pologne was honored with the title at a ceremony featuring the best Polish athletes of the past 25 years.

An important new title, Polish Sports Ambassador, was conferred on Czeslaw Lang, director of the Tour de Pologne. Lang was awarded this prestigious recognition during the “Gala for the athletes of 25 years” held Monday, June 2, in Warsaw, at the National Stadium in front of Poland’s highest political and sports authorities, led by president Bronislaw Komorowski and premier Donald Tusk. Among the best Polish athletes of the last 25 years who participated in the ceremony and received recognition were ski-jumping legend Adam Malysz, who won multiple medals and took the World Cup title four times, and the queen of Nordic skiing, Justyna Kowalczyk, the first Polish woman ever to win an Olympic medal in that discipline.

“I am honored. It is an enormous recognition that makes me proud and gives me great joy and satisfaction,” explains Lang, who won a silver medal at the Olympics in Moscow in 1980 and has dedicated his life to cycling, becoming a symbol of Polish sports. “Cycling brought me many victories, but the work with the Tour de Pologne, which has reached the top international level and is now on the UCI WorldTour calendar, is my greatest success – a success that I share with all my staff on the Lang Team who work with passion and dedication, contributing to the growth of the event year after year. It is our success, but it is also a success for all of Poland.”

This year in Poland, the number 25 takes on special significance, full of emotion and memories. On June 4, 2014, Poland celebrated 25 years of free elections (starting with the parliamentary elections of 1989). Playing a fundamental role in this process were the strikes by the shipyard workers of Gdansk, organized by Lech Walesa, the founder of Solidarnosc/Solidarity, the first independent trade union in the Soviet bloc. 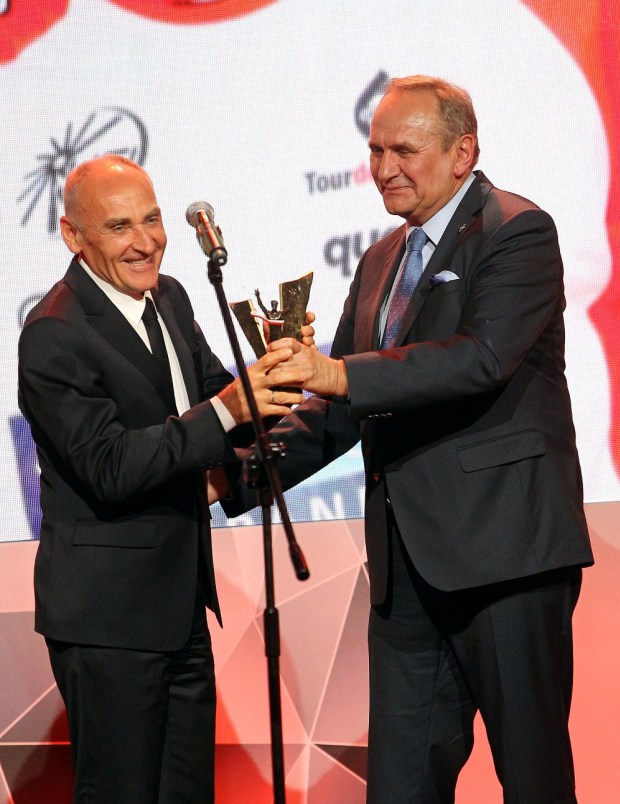 The 71st Tour de Pologne will commemorate this extraordinary historical moment when it starts on Sunday, August 3, at the shipyards in Gdansk, the site where the struggle for freedom was born. The distinguished starter will be Walesa, an exceptional individual who led the Catholic workers’ movement and, after a long and difficult period of confrontation with the Communist regime, became the leader of Poland, concluding a peaceful revolution that was able to restore freedom to the Polish people and open the eyes of and give hope to the entire world.

“I have always tried to give 100 percent, in sports and in life, but many have done much more than I, and it is these individuals that I thank, especially those who fought for Polish independence 25 years ago,” explains Lang. “These people had a goal, the struggle to achieve liberty. And it is thanks to this liberty that I have been able to realize my dreams and that Poland has become a great nation in which our children can live in freedom today.”

One for All and All for One