Daryl Impey finished in a front group of 16 riders on stage six of the Tour de France to move into the race lead. The South African becomes the first African to wear the Tour’s yellow jersey. Simon Gerrans led out Matt Goss for the sprint and conceded five seconds to Impey when the bunch split before the line.

“Simon came to me yesterday afternoon and asked if it was okay for him to pass the jersey along to Daryl,” said Sport Director Matt White. “I said it was fine. They’re great mates. What they’ve done for each other will never be forgotten. Simon won his stage with the perfect lead-out from Daryl, and he had his two days in yellow. For Daryl to be the first African in yellow, even if it’s only one day – well, it will change his life forever.”

“I was pretty emotional on the podium,” admitted Impey. “I was standing there and thinking ‘This is it.’ – this is the proudest moment ever of my career. I don’t think anything will ever top this. That’s not to say I’ll never be able to do it again, but not in this way. It’s like winning the jackpot.”

With strong winds in the forecast, a nervous peloton set off from Aix-en-Provence. Luis Angel Maté launched a lone attack and found himself up the road without any company from the stage six start.

“I don’t think he wanted to be up the road,” said White. “He attacked and looked behind him. When he realised no one had come with him and no one was chasing, I’m sure he felt pretty miserable. The general speed and anxiety of the bunch caught him before the intermediate sprint.”

With Maté reabsorbed, the peloton stuck together for the intermediate sprint and the Col de La Vayède, the stage’s only ranked climb. Crosswinds kept the pace high and the nerves higher. ORICA-GreenEDGE stuck close to the front in defence of the yellow jersey, often sharing pace-making duties with teams eager to stay near the front to keep their overall contenders safe.

“The nervousness made the race fast all day,” said White. “I’m not surprised that the bunch stayed together until the end.”

“It was such a stressful day,” Impey added. “I just wanted to get to the finish. I knew if I did the lead-out for Gossy as planned, I’d probably end up in yellow.”

Multiple crashes disrupted the final hour of racing with the peloton splitting in the last kilometre. The Australian outfit managed to stay safe despite a close call for Goss on the run-in towards the finish.

“It was a really tricky final,” noted White. “The roads were narrow. We knew there was a good chance there would be gaps at the finish.”

“Gossy got caught up in a barricade at 700m,” White continued. “Someone swung up from the Lotto train, and as he dropped back, it impeded Gossy just as Brett [Lancaster] and Daryl accelerated. Gossy lost the train and started chasing, but at that speed and with such a short distance to make gains, he wasn’t able to make contact.”

André Greipel (Lotto Belisol) took the stage win ahead of Peter Sagan (Cannondale) and Marcel Kittel (Argos-Shimano). Impey finished on the same time as Greipel to move into yellow.

“The team did a massive amount of work ,” said Impey. “I couldn’t have done it without them. They rode on the front all day. They got me bottles. Everyone did something. Svein [Tuft], Cam [Meyer] and Stuey [O’Grady] were on the front all day. Everyone stayed around me. Gerro did the lead-out. When I say everyone did something, I mean everyone – I don’t want to forgot anyone. It wasn’t just the riders. It’s the staff and management, too. It’s Gerry [Ryan] for giving us all an opportunity to compete at this level. Everyone pitched it to get me this yellow jersey. This is super special for me, and it’s a massive moment for South African cycling.”

Gerrans was caught on the other side of the split at the finish. The former yellow jersey is now at 5” in third overall. Impey and Gerrans are separated by Edvald Boasson Hagen (Sky) in second, 3” behind Impey.

“During yesterday’s stage when I had the yellow jersey on, I was really enjoying the experience,” said Gerrans. “I thought this could be a once in a lifetime opportunity. I basically wouldn’t be in yellow without the support of Daryl. At that point, I decided it would be a really nice gesture to pass it on to him for a day or two.”

“I went into today’s stage with the plan of helping in the sprint and then drifting back in the bunch,” Gerrans continued. “We all had to be together in the final to pass it over like that. The first objective was to keep the jersey within the team and ride for the sprint. While riding for the sprint, it would be simple to pass it over because it was only a matter of stage places on count back. Today I had the opportunity to change the life of a good mate of mine. That’s why I decided to do it. Who wouldn’t?”

While Gerrans may be cavalier about his decision, Impey is anything but.

“Simon could have kept the jersey if he had wanted, but he gave up his opportunity to give me an opportunity of my own,” explained Impey. “That shows exactly what this team is about. We have a culture where everyone is important and everyone gets an opportunity. I’m really thankful for that.”

“There are a lot of really, really good cyclists who never get the chance to wear the yellow jersey,” Impey added. “I’m one of the lucky ones.” 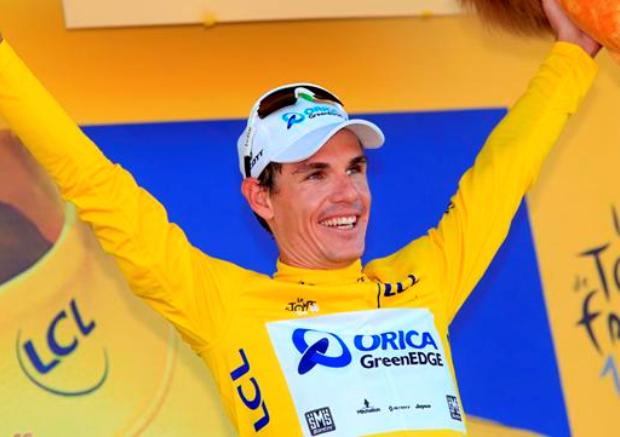 CYCLE TO… launches CYCLE TO MAPIC