Daryl Impey put his stamp on stage two of Bayern Rundfahrt, taking his third win of the season in commanding fashion. The stage victory now puts him in the overall leader’s jersey with three stages to go in the tour. Two wins in the early part of the season, stage two Pais Vasco and the South African Time Trial Championship, demonstrated that Impey is very capable of winning races over varied terrain. Today’s win in Germany shows that his form is back after taking a long break from racing while at home with his wife and new baby.

“I would like to dedicate this win to my wife and newborn son Ayden,” beamed Impey. “They give me extra motivation.”

The pace of stage two was fast from the beginning as riders attacked from the peloton almost immediately. First it was a break of six that gained time on the charging field. At the 30 kilometre mark, that break was brought back and a break of nine then took off. The nine riders established the biggest gap of the day as they reached 4’20” before the category one climb.

Over the top of the difficult climb, only five riders were left in the lead as a splintered peloton continued the chase. Eventually a relatively small group of 60 riders formed in the last 40 kilometres of the race.

As the pace remained high, the main field split again when a group of 14 riders emerged from the peloton with 20 kilometres to go. Impey and Simon Clarke were nestled safely in this leading group, and they had their sights set on the finish.

“Today was the hardest stage of the tour,” said Sport Director Laurenzo Lapage. “We knew from the beginning that we would ride for Daryl and as the stage unfolded everything was going according to plan.”

With three kilometres to go, Clarke jumped from the elite front group taking three riders with him. The small break was short lived as the first chase group, containing Impey, reabsorbed the four riders ahead of the finish. Clarke’s job wasn’t over yet as he dutifully went to the front to lead out Impey. It was a beautifully laid plan that delivered Impey to the finish victorious.

“The boys were excellent today,” said Impey. “They took care of me from start to finish. Clarkey did a great job setting me up for the sprint, Gerro [Simon Gerrans] was at my side all day and the rest of the boys made sure I was fuelled up right. It’s a nice win for me and the team.”

“The commitment from the hard working staff and riders of this team is indescribable,” added Impey. “It’s what makes this team and this win so special. Everyone is part of this victory.”

Although Impey hasn’t raced since Amstel Gold, he was hard at work at home and during team camp last week in Girona, Spain.

“Although I was on a break, I wasn’t sitting around lazily at home,” said Impey. “My coach Quody [Marc Quod] and I have really been working hard. The camp last week was also a big help.”

“I am really happy with my condition at the moment,” Impey said emphatically. “We will defend the jersey tomorrow and then I will give the TT my all. Gerraint [Thomas] (Team SKY) will be tough to beat, but a stage win at this point is great and the yellow jersey is a bonus.” 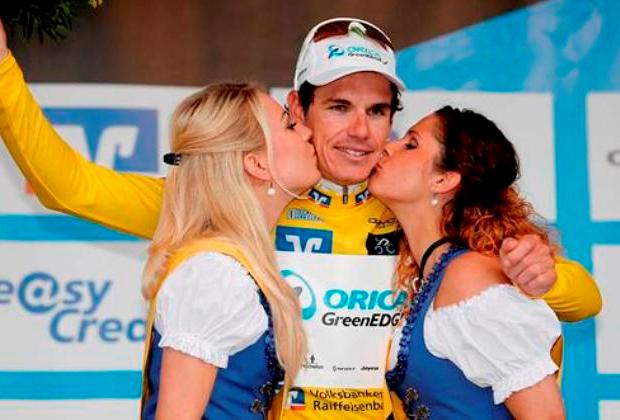