Dean Downing, who recently retired from pro racing and who is one of the most popular pros in British criterium racing will be taking part in the Cape Rouleur for the first time. Downing together with many of the Cape Rouleur’s European international riders will stay on to ride the Cape Town Cycle Tour, enjoying a full week of warm weather cycling. Downing best known for his success at Rapha Condor Sharp, has been to the Western Cape before; most notably in 2005 when he rode the Cape Town Cycle Tour with his brother Russell who won! He has since been back to the region getting involved in a number of development rider and charity activities with HotChillee.

Alan Winde, Western Cape Minister of Economic Opportunities said: “Its wonderful validation when the international pros return. Having Dean Downing back again for the biggest week of cycling is testament to the fact that our region is emerging as a leading cycling destination. The direct economic impact on the region of the Cape Rouleur, Cape Town Cycle Tour and the Cape Epic is in excess of R700m. Showcasing the region and hosting the internationals additionally generates a significant amount of philanthropy, business and investment.”

Minister Alan Winde is a keen supporter of the event. He remarked that he was glad his diary was too full to ride this year as he “would be concerned to go up against the likes of Downing”!

Dean Downing said, “I’m super excited to be riding a multi stage event in some of the most beautiful countryside with some amazing riders from all over the world. What’s more it is in warm weather! Very special for me is seeing how the Development Rider programme has progressed and riding with them again will be my highlight.”

Sven Thiele, HotChillee’s founder said, “ ’DeanO’, as he is known to the crowds and supporters in the UK exemplifies a class of courageous criterium racer that is once again capturing the imagination of the public with large attendance and TV figures. With over 50 wins in the last 10 years he is widely known, loved and admired. He also puts a lot of energy into youth and development riding and Dean will be spending some time with the teams from Velokhaya, Songo.info and Cape Town Giants at the Cape Rouleur. I have no doubt that he will also want to stretch some of the MTN-Qhubeka riders legs.”

The Cape Rouleur is a multi stage endurance road cycling event and takes place from 1-5 March, starting with the Prologue in Franschhoek and finishing 600km later in Cape Town with the Festival Ride on the 5 March, in the week running up to the Cape Town Cycle Tour. Next years event takes place from the 28 February – 3 March 2016. 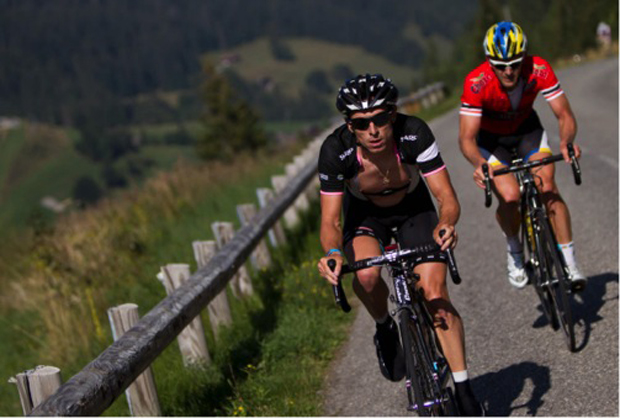 Dean Downing in the break with Karl Platt (in leaders jersey) during Stage 2 of HotChillee’s Alpine Challenge 2012 in the French Alps.

inGamba Partners With Another Leading Brand In fi’zi:k