DeFeet is announcing it’s long-standing partnership with Team Deceuninck-Quickstep will not continue into 2020. One of the longest relationships in the history of professional cycling, DeFeet has been involved with every iteration of the team since 1995. The 24 year span was an enormous success for DeFeet, allowing the brand to forever claim a historic number of victories in the sports biggest events.

As the team evolved through Mapei, Domo, OmegaPharma, Quickstep, Ettix and Deceuninck, DeFeet was the one sponsor that the riders asked for year after year. “The riders and management knew DeFeet would be listening to their needs and bring new yarns and technology to their feet”, said Shane Cooper, founder of DeFeet, adding “The team was a constant test lab we used to hone our new yarns and products. It was the perfect, mutually beneficial relationship. They helped us craft the best products in the world, and DeFeet they did, winning more than any other team.”

DeFeet forged strong working relationships with all the riders over the 23 year period. Johan Museeuw, Andrea Tafi, Tom Steels, Wilfried Peters, Brian Holm, Paolo Bettini, Tom Boonen, Mark Cavendish, Tony Martin, Julian Alaphilippe and Elia Viviani to name but a few. Deceuninck-Quickstep rider Michael Morkov, always visible at the front of the 2019 Tour de France, liked the product so much he has been the DeFeet distributor in Denmark for many years, already.

Cooper noticed certain riders had an amazing feel for DeFeet socks within their cycling shoes. When DeFeet introduced the Levitator Lite, Mark Cavendish asked for older Aireator, instead. “Cav immediately realized a difference of a fraction of a millimeter in thickness of the sock”, Cooper said. “Paolo Bettini on the other hand, he expressed he wanted more volume in his sock, but only in one specific spot. That led to the Cyclismo, a sock that creates a tighter fit over the pedal spindle, reducing slippage and heat for many riders.” 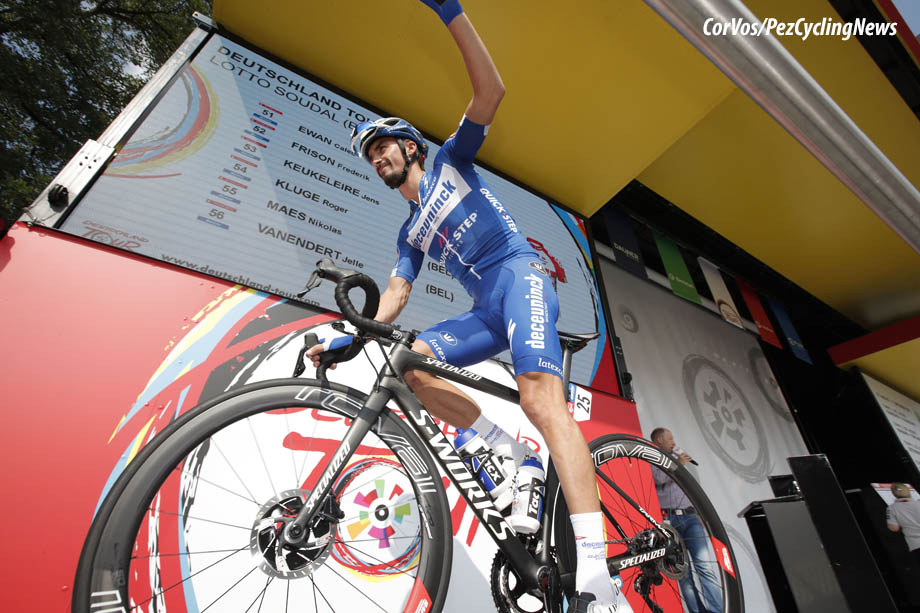 In 2019, DeFeet’s final Tour de France with the team, Julian Alaphilippe wore the new DeFeet EVO Disruptor, the most aerodynamic socks ever tested, to win the yellow jersey in the Tour de France for 14 days. All told, the team wore DeFeet to a list of wins that may not be equaled again in the sport. 736 UCI victories, including 19 Monuments, 4 Road World Championships, 6 ITT Road World Championships, 4 TTT World Championships, 2 World Cups and an Olympic Title. In 2018, Deceuninck – Quick-Step was the most successful squad in the world for the seventh year in a row, thanks to an astounding 73 UCI victories. On the eve of the Tour de France in 2018, Cooper hand delivered a thank you gift to the team: the world’s first sock ever made from golden orb spider silk from Madagascar. It was only the fourth known completed item in human history made from the famous fiber. It was also the most expensive sock ever made, valued at $5,000 per pair.

“We learned a lot in those 23 years. We still work with other professional programs, and now some new doors open up”, Cooper says. “DeFeet will be able to focus more on grassroots clubs and events, and telling our recycled bottle, USA grown wool and environmental stories which are really becoming more important in the big picture.”

To commemorate the relationship with Team Quickstep, DeFeet is offering a Limited Edition sock while supplies last on defeet.com starting November 1, 2019. The socks are a sublimated “Wolfpack” design made in collaboration with Bicycle Crumbs.

Cooper finished by saying “DeFeet says thank you to the Wolfpack. We have been honored to work with such a world class team. The team always welcomed us as part of the pack, and we will continue to howl for the worlds best team.”