On Saturday, March 4, Team Dimension Data for Qhubeka will take on Strade Bianche with eight strong riders ready to fight for glory. Also known as Europe’s most Southern Northern Classic, the Italian World Tour one-day race is feared and famous for its 11 sections of white gravel roads.

The 175 km, with start and finish in Siena, include several short but steep climbs for the riders to tackle. Many of these uphill sections take place on gravel roads, which makes them even harder to overcome. In total, no less than 62 km of white gravel roads await the peloton on Saturday. The last three sectors all cover climbs with double-digit gradients. From the top of the last one, only 12 km remain of the race.

As the riders head towards the old town of Siena, to take on the final kilometers, the road starts to rise once again. With gradients over 10 % on narrow streets, we can expect a furious fight amongst the leading riders. The steep slopes only end with a few hundred meters left to go. The last right-hand turn, with 150 meters to go, is crucial as the remaining part is downhill towards the finishing line. Usually, the first rider into this last corner claims the victory.

After its debut appearance in 2014, this is the second time Team Dimension Data for Qhubeka lines up for Strade Bianche. Nathan Haas and Edvald Boasson Hagen will lead the team after both riders have shown great shape in their first races of the season. Furthermore, Boasson Hagen also knows what it takes to fight for the win in the race. Our Norwegian champion finished fourth back in 2009.

Nathan Haas – Rider
“For me, Strade Bianche is easily the most spectacular race on the calendar. The finish in Siena is absolutely magical and the challenge of riding on the gravel roads is just too good. We have a pretty awesome team here with a few big cards to play and I think we are going to put on a super exciting race”.

Alex Sans Vega – Sports director:
“We are very excited to take the start in Strade Bianche. It’s a young race but already one of the iconic races of the season. This year, it’s even going to be more challenging with more kilometers on gravel roads than usually. Half of our team has done the race in the past, while it’s the first time for the other half. We expect to be well represented in the last 50 km and when the main peloton usually splits up, on the gravel sections, we hope to have at least three riders up there with the best. From there on, it will be difficult to control the race. We will have to wait and see what happens. We have a few guys who are already fit for the cobbles classics so they will be fit for this race too. Edvald [Boasson Hagen] seems to be in good shape now and Nathan [Haas] has done well in this race before. We start out very ambitious”. 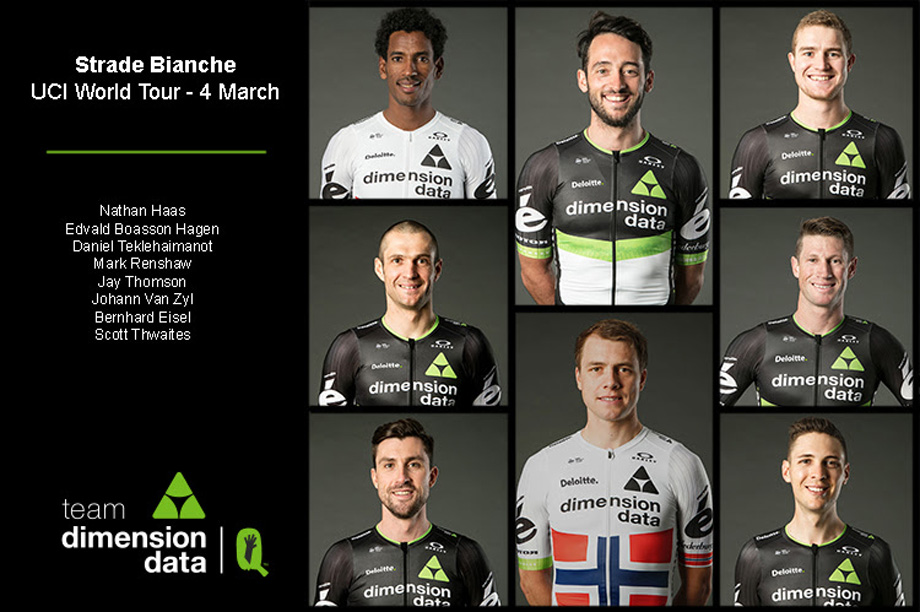 Tiesj Benoot and Tim Wellens look ahead to Strade Bianche