ORICA-GreenEDGE put on a dominating display in Gippingen to deliver Michael Albasini to the top step of the podium at GP du canton d’Argovie. It is the second win of the season for Albasini, who has twice won the one day Swiss race near his hometown of Lanterswil.

“It was a perfect, coherent effort from the team,” said Sport Director Vittorio Algeri. “It’s great to see Michael pull off the win. He did a great performance backed up by a solid team.”

“This is one of the only one day races in Switzerland,” added Albasini. “It’s also the 50th anniversary of this race. As a Swiss rider, I’m quite happy to write my name in the history books here.”

Daryl Impey represented ORICA-GreenEDGE in an early move of seven. While Impey toiled away to help establish a lasting advantage, his teammates tried to decimate the bunch on the punishing circuit.

“It was a fast start,” explained Albasini. “The break went quite early. We were covered in the move by Daryl Impey. It was perfect for us because we knew if the break went to the line, we had a good chance. Daryl was the fastest in the group. Only Astana and Vacansoleil had missed the move. They did the work to bring it back together.”

The attacks continued throughout the entire race resulting in a constant reshuffling. Riders from ORICA-GreenEDGE were represented in every significant move.

“It was a chaotic finale with the situation changing after every half lap,” noted Albasini. “Near the end of the race, we had Stuey [Stuart O’Grady], Sebastian [Langeveld] and Impey in a group of around ten riders. This allowed me to stay safe behind and watch the action as it happened.”

Albasini bridged up to the front group inside the final lap. By this point, the lead group had swelled to include 16 riders. The attacks continued nearly all the way to the finish. Alexandr Kolobnev (Katusha) was the final rider to be swept up before the sprint.

“Kolobnev was caught with at 1.5 kilometres,” said Albasini. “There were only 12 guys in the sprint, and I had enough to take the win. I wasn’t sure what to expect of my condition. It’s my first race since Romandie, and I just came back yesterday from training at altitude. I’m a bit surprised to do so well today.”

“It’s really great for Michael’s confidence to take a win like this going into Tour de Suisse and Nationals,” added Algeri. “It’s an important win for the team as we build the bridge into the next part of our season.”

Before he heads to Tour de Suisse, Albasini will spend one last night with his family at home. They were on hand to see him take the win, and they’ll celebrate before sending him off to the nine day tour that begins on Saturday.

“It’s always nice to win in front of the family,” said Albasini. “I didn’t have a chance to see them at the start, but I saw them during the race and a little bit after I had won. I’ll go home tonight because I live quite close to here. We can celebrate as a family, but we won’t celebrate too much. Tour de Suisse starts Saturday, and we have some big goals for the week.” 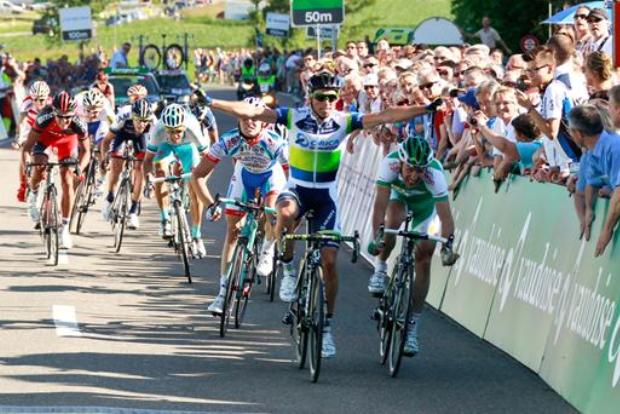 Pez Bookshelf: Revenge of the MAMILs!