Twenty-one year-old Jordan Kerby will be the first rider to compete in Drapac Pro Cycling’s 2014 Cycling Australia Road National Championships campaign in Wednesday’s Time Trial events. Kerby will be the penultimate rider out of the start house in the Under-23 Men’s Time Trial and admits there is some pressure attached to his ride.

“I’m also the youngest rider in the team so it would be nice to show management a good reason why they signed me up,” the Queenslander said. “I put a lot of emphasis on the Nationals because there’s a jersey up for grabs.”

Kerby will take on the 28km event on Wednesday having finished fourth in 2013, and is hopeful that this year will see him take a better result.

“Last year I started right near the front and I didn’t have anyone to chase and there was three guys who didn’t start in front of me – that was a bit disappointing,” he explained. “Now that I know I’m starting near the back and with a lot of good competition there it will be good to gauge myself against some of the other riders.

“I’m definitely would love to be on the podium, I don’t think it’s out of my reach.”

“I would be surprised if we didn’t get a medal in the Under-23,” he explained. “Jordan’s been recording some great numbers here in Bright and I’ve been very impressed with how he’s been training.”

Later in the day when the Elite Men begin, Drapac Pro Cycling will have three riders contesting the 45km race against the clock with former runner-up Jack Anderson, Lachie Norris and Will Clarke all set to line up.

Vogels is optimistic that the trio can snag a solid result.

“I think Will Clarke’s going well and he may shock a few in the time trial but I wouldn’t put Will Clarke down as a specialist – he’s just a beast,” Vogels said. “He’s a very strong guy so I think he would be happy with a top five finish in the national time trial championships and we’d be over the moon with that.

“Jack Anderson’s been second before so while he’s not a pure time triallist, I think it will be a great warm up for the road race when it comes to all those guys.”

Clarke will leave the start house at 15:05 with just five riders to follow his effort, a position the Tasmanian is happy with.

“I prefer to start maybe a bit earlier so I can catch other riders,” he said. “It gives you a bit more motivation.”

Clarke finished in fourth place in 2010 – his best result in the event and while admittedly lacking in specific time trial preparation, believes he is capable of a similar result.

“I’m feeling pretty good on the road bike at the moment and while my fourth place came in 2010 and quite a few years ago now, hopefully I can get another top five performance on Wednesday,” he said. “That’s my goal.”

Anderson, 26, was runner-up behind Cameron Meyer in the 2010 Championships but suggests that the change to the course at Burrumbeet will work against his chances for a repeat performance.

“When I won the silver medal it was on the hillier course that started and finished in Buninyong,” he said. “So this year it’s more of a case of wanting to improve my time trialling and get back to my former self. I’m not doing it as well as I used to. I want to go through the process and a top 10 of even a top five would be awesome.

“The course is just a little bit too flat and more suited to the more powerful guys to suit me.” 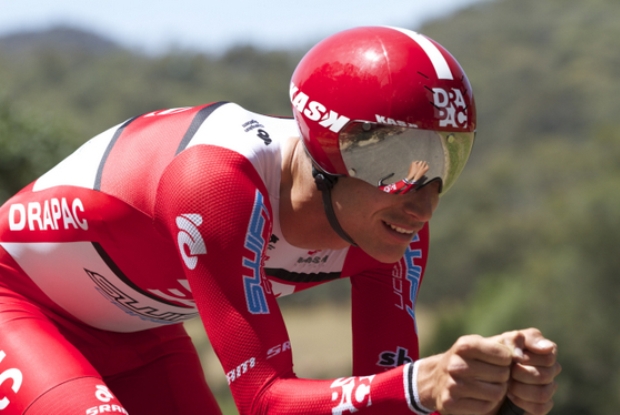 Will Clarke during a TT training ride in Bright.