Drapac Professional Cycling capped an exciting week at the Cycling Australia Road National Championships by placing six riders in the top-20 of the Elite Men’s Road Race on Sunday.

Only WorldTour riders finished ahead of Lapthorne, demonstrating the 30-year-old’s class.

Drapac’s strength in numbers lit up the 183.6km race around Buninyong, Victoria, with workhorse Adam Phelan in his first senior road race, Clarke and the Sulzberger’s driving the pace in the day’s 17-man breakaway which gained a maximum advantage of close to four minutes before being dissolved with just two laps remaining. In a repeat of last year’s Stirling stage at the Tour Down Under, strongman Clarke along with Orica GreenEdge’s Simon Clarke both attempted to hold off the chasers before a final selection began their attack for the finish, including Lapthorne and Meyer.

“We were the big animators in the road race,” said Directeur Sportif, Henk Vogels. “We tried to do everything that we could and be as aggressive as we could with a good race plan. We took it to the rest of the field but it wasn’t to be.

“It was a world-class podium and while we’re very satisfied with the result, we’re a little bit disappointed that we couldn’t win,” Vogels continued. “The team rode really well.”

Drapac’s Road Nationals campaign got off to a dream start on Wednesday with Jordan Kerby claiming gold in the Under-23 Men’s Individual Time Trial. In the Elite event, Clarke and Jack Anderson both featured in the top-10, finishing 5th and 9th respectively, leaving no doubt that they were in top form ahead of the road race. Norris meanwhile, was 20th.

On Thursday, the team’s form was on show in the Elite Men’s Criterium with the red train controlling the 44km race until the final lap when an unfortunate crash ended any hopes of a podium finish.

The team will assemble in Adelaide later this week in the lead up to Drapac’s first start at Australia’s UCI WorldTour event, the Santos Tour Down Under. There, Vogels is optimistic of more strong showings from the squad.

“Obviously with our signings, people expect a lot from certain people but as a collective, we rode really well at Road Nationals and I’m happy with that,” he explained. “As a Professional Continental team you’ve still got to try and break through to that next level so there are some exciting days ahead in Adelaide.” 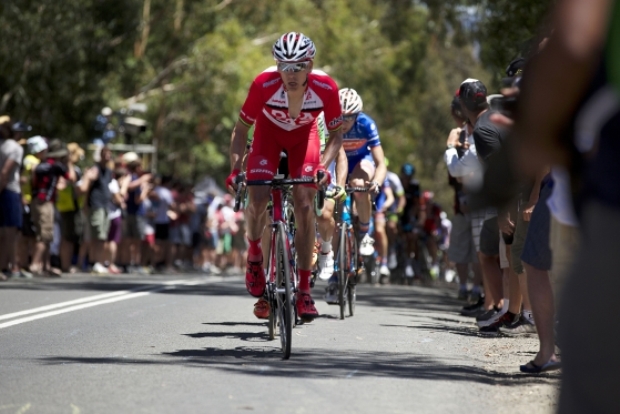