The eight-man team will be coming straight from a training camp on Queensland’s Gold Coast and Directeur Sportif Henk Vogels believes the Australian Professional Continental outfit is more than ready for their first appearance at the UCI 2.HC event.

“From all reports via our Director of Performance, Keith Flory, all riders are in top condition,” Vogels said.

On offer will be five stages for the fast men, and three for the climbers over a total of 1254 kilometres starting from Alanya on the Mediterranean coast. It will be the first time racing the Presidential Tour of Turkey for the entire team with the exception of Wes Sulzberger. The 27-year-old admits that the event has “changed a bit” since he last raced it in 2011.

It will be the second time this season that the Drapac squad has tested themselves against WorldTour-level squads, having received an invitation to the Tour Down Under in January where they finished third overall in the team classification.

“The tour has changed a bit since 2011 with hilltops in this year’s race,” said Sulzberger. “It’s going to be a challenging one for GC.”

Sprinter Wouter Wippert, recent winner of the OCBC Singapore Criterium and having snagged victories at the Tour de Taiwan and New Zealand Cycle Classic, will be the team’s focus over the first two stages. Stage 1 is a 141km return loop down the coast from Alanya; Stage 2 heads north from Alanya to Kemer.

The third stage (Finike – Elmali) finishes at 1825 metres above sea level and will determine the first real order of the general classification, with Vogels describing the finish as “filthy.” Sulzberger believes a waiting game may be required on the 185km stage.

“A break will be likely to go away early during this stage, but with a lot of WT teams I feel it will be controlled and they will reel the breakaway in and each team will launch their GC riders into the final climb,” he said.

The fourth stage (Fethiye – Marmais) is a lumpy day for the peloton with lots of smaller climbs to contend with.

“This could be good option to go in the breakaway if you’re not close time-wise to the GC,” said Sulzberger. “The stage is only 130km playing to a breakaway’s advantage. The other factor is the team that will be leading the race. The leading team will have to take the control of the chase and if it’s a non-WorldTour team we can look forward to some aggressive racing.”

Stage five is another opportunity for Wippert, while stage six could see fireworks resume on the penultimate climb of the day leading into the mountainous finish in Selcuk. Stages seven and eight will again see the fast men of the peloton fight for the win.

“Drapac has options for everything this tour can throw at us,” concluded Vogels. “The team won’t be wasting any opportunities and I can’t wait to see how we perform against some of the best in the world once again.” 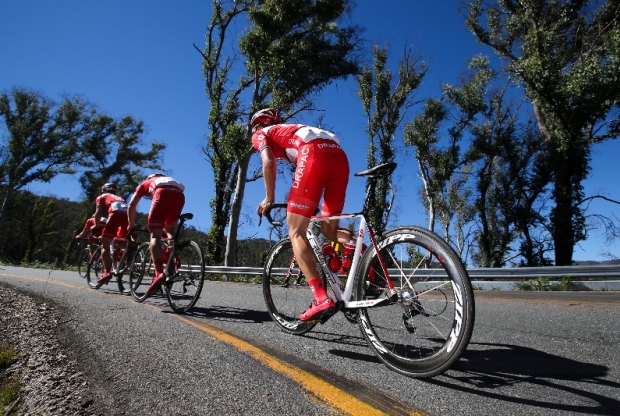 The team in action. © Mark Gunter.