Drapac Professional Cycling will make its debut at the Woodside Tour de Perth next week, the first event on the 2014 National Road Series (NRS) calendar. It’s set to be a bumper week of racing for the team with a squad also taking on the OCBC Cycle Singapore Criterium.

Jack Anderson, Will Clarke, Jai Crawford, Ben Johnson, Travis Meyer, Lachie Norris and Tom Palmer will all line up for the four-day Tour de Perth’s opening stage criterium in Fremantle on the evening of March 26.

The team is committed to having a presence in the Australian domestic calendar and will be the sole Professional Continental outfit competing in the NRS in 2014.

According to Directeur Sportif Henk Vogels, who will take the squad to Perth and hails from the West Australian capital, Drapac should be the beneficiaries of plenty of local knowledge:

“I think it’s going to be a harder race [when compared to 2013],” he said. “They are roads that I grew up on as a 10 and 11 year-old boy and I used to do my club races up around Pickering Brook which is the climbing stage in the hills [Stage 2, Kalamunda]. Also, the addition of the very steep climb at Perry Lakes [Stage 4] is also going to be crucial – these elements will play a key role in the make-up of the race.”

Vogels explained that the squad will be taking an ambitious approach to the four-day, four-stage event.

“For us, we’re going there with a very strong team and everyone’s in great shape,” he said. “The only one who is under a little bit of an injury cloud is Tom Palmer – it’s his first race back. We’ve got three or four guys who really want to win this bike race and not just a stage. We’ll be aiming for the top step.

“Will Clarke’s going to be good in the time trial; Jack Anderson’s in red-hot form; Travis Meyer’s on his home turf and not to mention Lachie Norris who had a great Oceania Games. I think we’ve got a really well-balanced team and it’s one of the strongest.”

Meyer, a Perth-native, has had plenty of success at the event in its previous incarnation, taking home the overall victory in 2009 and featuring consistently on the podium in 2007 and 2010. Vogels is tipping a strong showing from the 24-year-old and Meyer himself is hopeful of playing a defining role in the event.

“I’m really looking forward to heading back to the Tour de Perth,” he explained. “It was sort of the race where is all started for me when I was younger and I had a win in the elite race in 2009 so it’s a race that’s pretty exciting for me and I always really enjoyed it.

“To be racing at home and especially with the NRS field that we’ve got nowadays it’s going to be a really hard tour but I’m really looking forward to it.”

Meantime on March 28, Jonathan Cantwell, Floris Goesinnen, Bernard Sulzberger and Wouter Wippert will put their speed to the test under lights in Singapore against a world-class field.

Wippert has enjoyed tremendous success since joining Drapac for the 2014 season, with three victories, two runner-up placings and a third. In Singapore, the 23-year-old is hoping to add to his tally once more.

“The form is good at the moment so of course, I’ll head to Singapore chasing a good result,” he admitted. “There will be a team of four of us racing so the overall goal is that Drapac wins the criterium.

“I believe it is possible for me to win but at the end of the day, it’s still a race and anything can happen.” 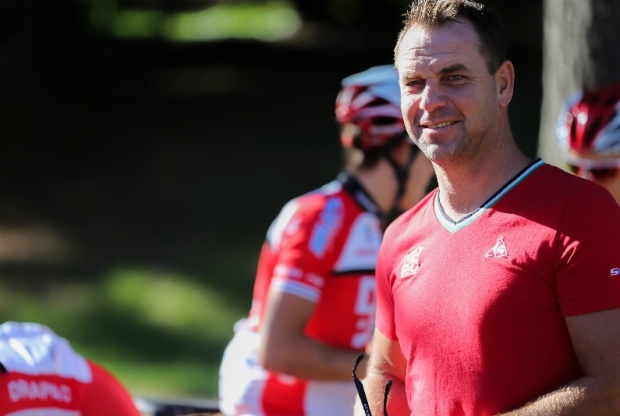