Drapac wraps up Tour Down Under in aggressive style

Drapac Professional Cycling capped a tremendous UCI WorldTour debut with yet another podium appearance for Will Clarke, while Jonathan Cantwell sprinted to fifth place in the Stage 6 finale at the Santos Tour Down Under.

Clarke got moving early in the 85.5km final stage criterium, dragging Julien Berard (Ag2r La Mondiale) and Maxim Belkov (Katusha) with him on the second of 18 laps.

“It was the plan again to be in the break so I knew I had to be ready to go in the first kilometre or so,” Clarke explained. “I just attacked hard and forced the break.”

There was cause for concern when with 50km to go, Clarke punctured and was reliant on neutral service for a replacement wheel. True to form, the 28-year-old Tasmanian fought to join the other two escapees.

“I thought it could be my day done and I could be going back to the bunch a bit early,” Clarke said. “I had to fight for a lap to come back to the other guys and I felt a bit cooked there for a couple of laps and felt strong again there at the end.

“I’m pretty happy to get the Most Competitive three days out of six this Tour Down Under.”

With the breakaway reeled back in with two laps remaining, the peloton got organised for the sprint.

“It was so hard to hold position today,” explained Cantwell. “I said to Wes and Travis with five to go that was when we had to move up and hold position and they did it to a tea. It was perfect. With two corners to go I lost a couple of positions and had to sprint from about 10th.”

Cantwell, who spent the Tour Down Under still feeling some of the effects of a crash at the Australian Criterium Championship, was buoyed by his final stage effort.

“I’m feeling really fast and as the tour’s going on I’m getting better which is a good sign for the Sun Tour,” he said.

Directeur Sportif Henk Vogels said that today’s fifth place for Cantwell was “an excellent result” for the sprinter while then paying tribute to his squad for their third overall in the Team Classification.

“I couldn’t have asked any more of the boys; the team has animated the bike race every single day,” Vogels said. “Will Clarke, ‘The Beast’ or ‘Big Horse’ as he’s becoming known, earning Most Competitive for a third day as well as all the other guys, they’ve really put in and I’m stoked.”

“Michael Drapac’s obviously very happy as well and I know that he is very proud of what has been achieved here in Adelaide this week.” 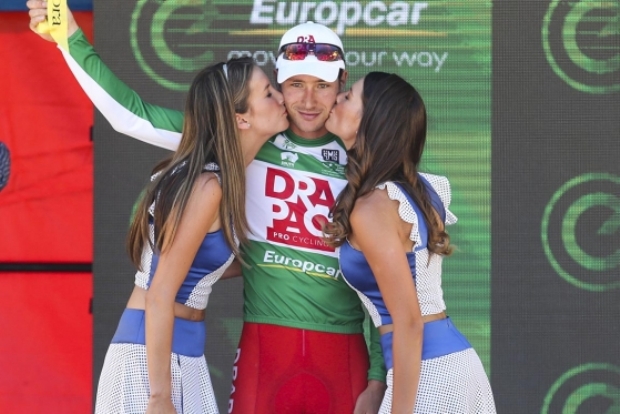 Will Clarke on the podium for a third time as the Most Competitive rider on Stage 6 of the Tour Down Under. © Mark Gunter

Team Belkin has a good start of the season