Eddie Dunbar of the Axeon Hagens Berman Cycling Team made history Saturday by becoming the first Irishman to win the Under 23 edition of Ronde van Vlaanderen. 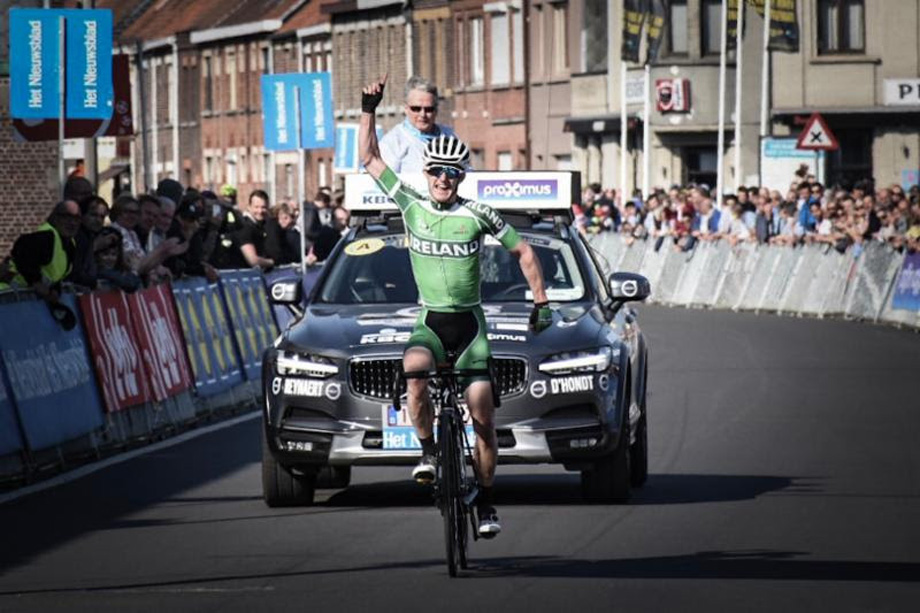 Eddie Dunbar became the first Irishman to win the Under 23 edition of Ronde van Vlaanderen. (Photo by Joyce Jason Ghijs.)

Racing for the Irish national team, the 20-year-old from Cork attacked about 35 kilometers from the finish of the 168.2-km race and soloed to a 49-second win over a chasing group of 11 that included his Axeon Hagens Berman teammate, Neilson Powless.

“I was actually cramping in the last three kilometers and was just hoping that my legs would not lock up completely,” Dunbar said. “So I was trying not to press too hard. Once I passed two kilometers to go, I knew I was not going to be caught. There were so many things going through my head at the end. I was even wondering if there was maybe a guy ahead of me.”

Powless said he had a front-row seat when Dunbar escaped from the peloton.

“When Eddie went, I actually tried to attack up to him over a cobbled sector on the circuit and got within 10 meters maybe,” he said. “I looked back and there were still a long line of riders on me, so I pulled off hoping someone else would finish it off. No one rode and Eddie got away.”

Dunbar’s attack came just after a move that included another of his Axeon Hagens Berman teammates, American Logan Owen, was brought back. Tobias Foss (Norway) eventually joined Dunbar, followed by Alexys Brunel (France). But Foss could not keep pace on the hilly, cobblestoned terrain.

Brunel and Dunbar rapidly built a 50-second lead as they started the final lap of the 22-km local circuit. Then, on third-to-last climb of the race – the Eikenberg – the reigning Irish Under 23 national time trial champion attacked. And in the same manner as Belgian Philippe Gilbert last week in the professional version of Ronde van Vlaanderen, Dunbar made it look easy soloing to the finish.

“I think this year is more relaxed for me,” he said. “My training has gone better and I am more motivated this year. “It is not like I was not motivated last year, but I have had more things to motivate me this year. So it is different. I am going back to the way I used to cycle. I feel better on the bike both mentally and physically.”

The victory was Dunbar’s first of the season after being bested by Powless by tenths of a second in last Sunday’s individual time trial on the penultimate stage of Triptyque des Monts et Châteaux. Dunbar went on to finish second overall and Powless was third in that three-day, four-stage Belgian race.

“Eddie was super strong today and no one would commit to an organized chase,” Powless said. “He was impressive and definitely deserved the win. I am pretty sure he was off the front from 35 kilometers out and I am super stoked to see a ride like that pay off.”

The 20-year-old Roseville, California, native said he nearly crashed while setting himself up for the sprint with 300 meters to go in the start and finish town of Oudenaarde.

“I had to restart my sprint, but there just was not enough time to salvage it,” he said. “In the end, I am super happy with my result and I can’t be happier for Eddie. That was an incredible ride he put in.”

Dunbar’s victory was the 13th of the season by an Axeon Hagens Berman rider and the third in UCI competition for the Axel Merckx-led American development team. Dunbar will re-join the team next weekend for the Under 23 edition of Liège-Bastogne-Liège, a race which Owen won last year. 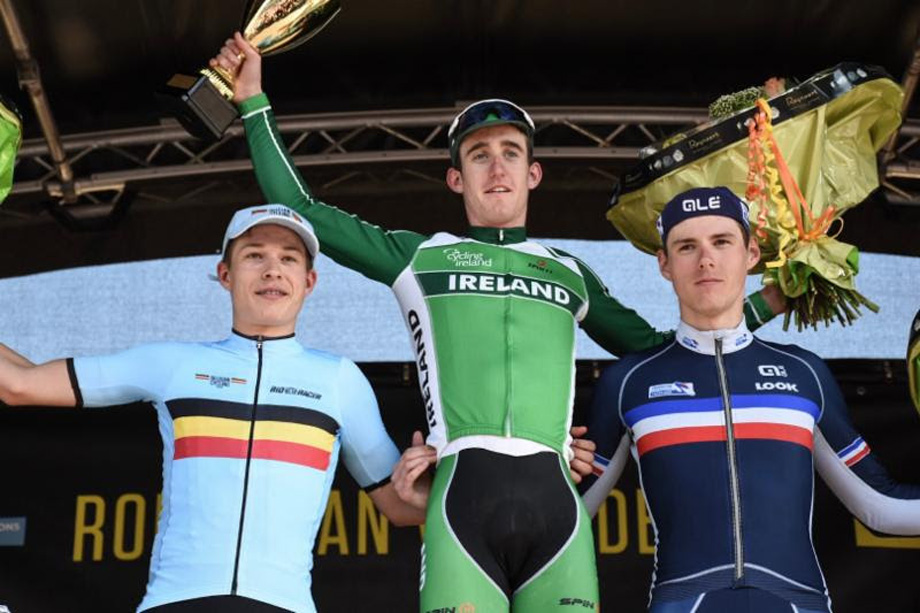