Irish Under 23 time trial champion Eddie Dunbar finished third and earned the “king of the mountains” title Sunday at the 57th edition of GP Industria & Commercio in Italy. 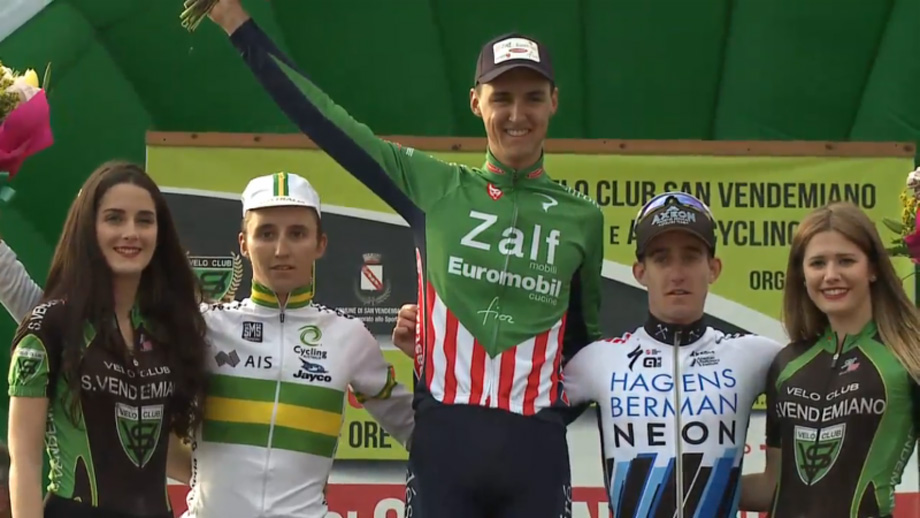 The 20-year-old Axeon Hagens Berman Cycling Team rider whittled the field down with attacks the last two times up a steep, 1.1-kilometer climb of the finishing circuit in the 171.8 km race. The first time, he sliced the field down to 14 riders. The second time, only three could stay with him.

“For sure, Eddie was one of the strongest guys and did a heck of a job today,” Axeon Hagens Berman Sport Director Koos Moerenhout said. “It is not like he snuck onto the podium. He was one of the best riders in the field.”

Up and over the summit, the quartet enjoyed no more than 20 seconds of freedom in the final few kilometers. But once he knew his group would survive to the finish, Dunbar said he was feeling confident about his sprint.

“I knew the quickest guy of us four was the one who actually won (Italian Nicola Conci),” Dunbar said. “So basically, it was matter of getting in the right position to challenge him. I was coming up fast between him and the Australian rider and just about caught them.”

Dunbar said he is pleased with his results from the spring season. Earlier this month, he became the first Irishman to win the Under 23 edition of Ronde van Vlaanderen. He was second to teammate Neilson Powless in the Stage 3a individual time trial at Le Triptyque des Monts et Chateaux on the way to a runner-up finish in the overall standings. He also enjoyed five other top 10 finishes while racing for either Axeon Hagens Berman or the Irish national team.

“I am going to go back home now, take it easy and get refreshed for my next race (Ronde de l’Isard, May 18-21) in France and then the Baby Giro (Giro Ciclistico d’Italia) after that,” he said. “I thought my spring went pretty well. Obviously, winning Flanders was a big result that took some of the pressure off for the rest of the season. I am still going to work hard and all, but when you are riding well, the results come naturally.”